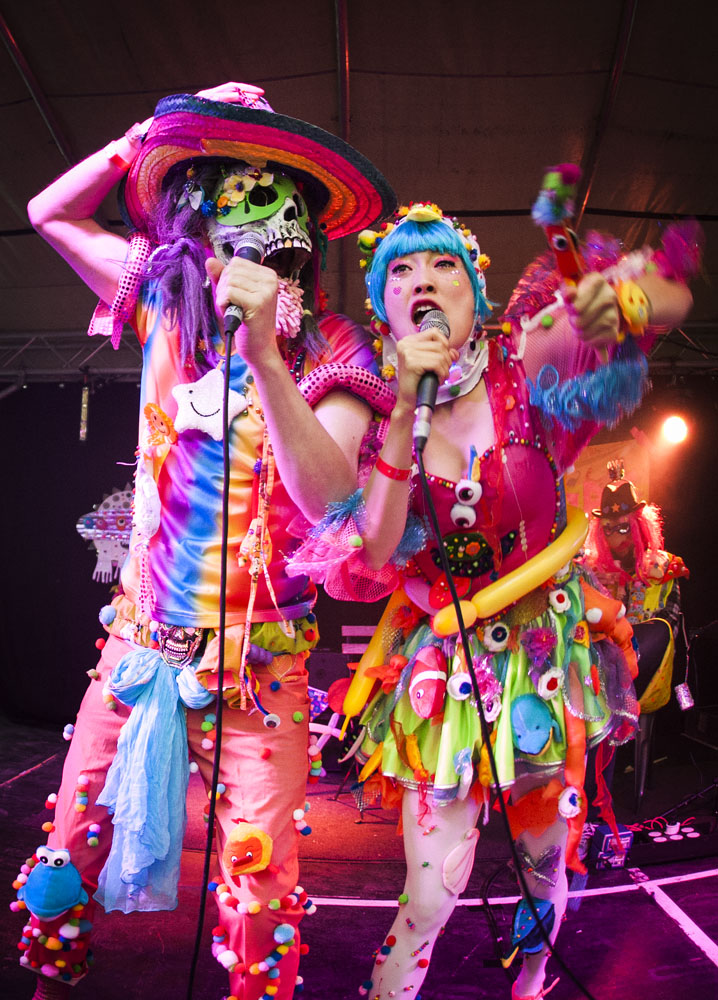 2019 marks 15 years of Supersonic, meaning 15 years of the same adventurous, independent spirit playing host to some of the most ground breaking musicians and artists from around the globe, from LCD Soundsystem, Anna Von Hausswolff, Holly Herndon and The Bug to SUNN O))), Jenny Hval, Godflesh and Mogwai.

This year we have the honour of adding heavy music pioneers Neurosis to that ever growing list, but the fun doesn’t stop at one weekend. We have a consistently curious year round programme which promises to make 2019 a corker. Here’s what we have coming up… 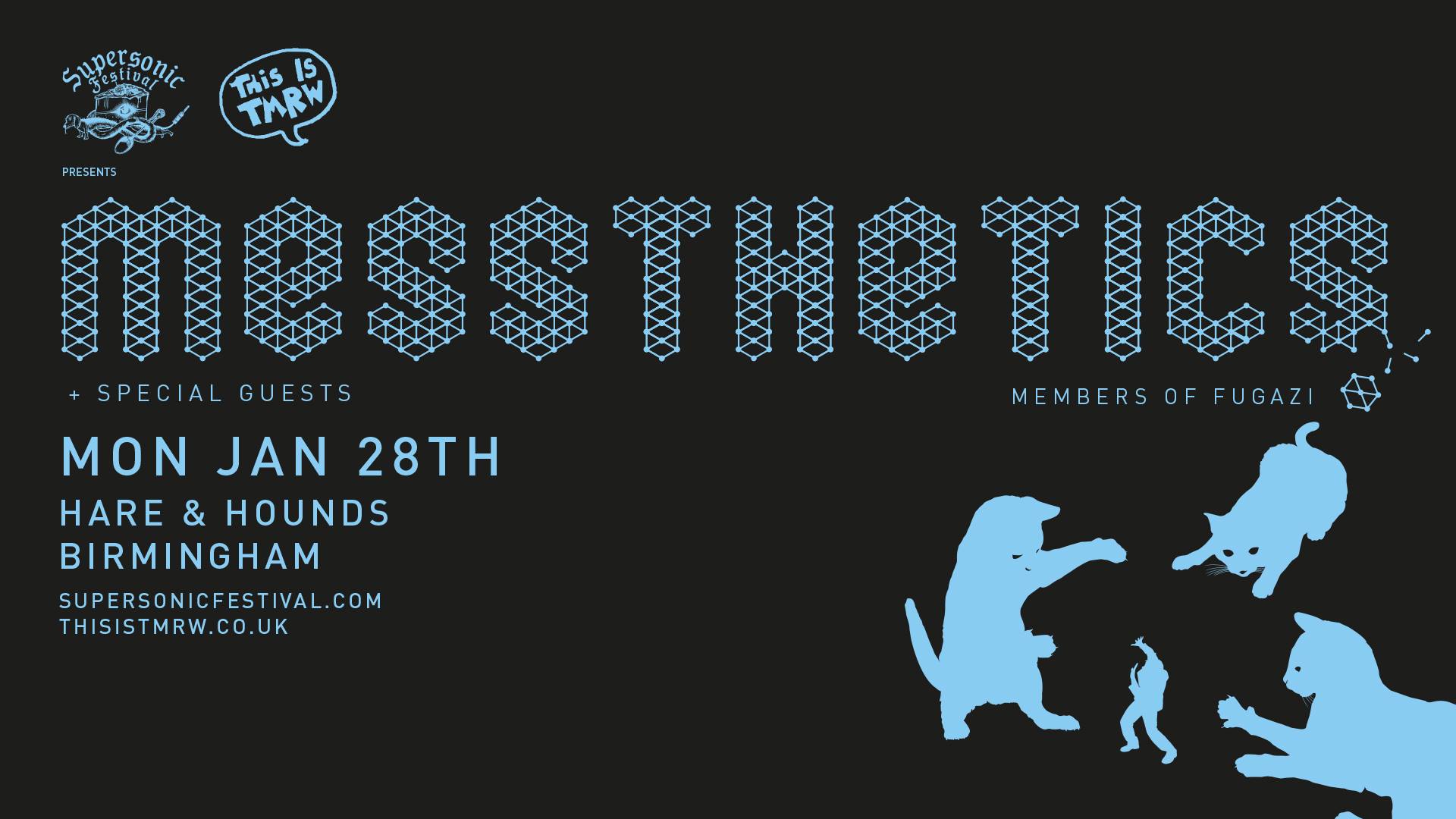 Brendan Canty and Joe Lally were the rhythm section of the band Fugazi from its inception in 1987 to its period of hiatus in 2002. This is the first band they’ve had together since then. Anthony Pirog is a jazz and experimental guitarist based in Washington, D.C. One half of the duo Janel & Anthony, he has emerged as a primary figure in the city’s out-music community.

The trio’s debut includes nine songs recorded at Canty’s practice space throughout 2017, live and mostly without overdubs. It’s a snapshot of a band dedicated to the live ideal, where structure begets improvisation.

Guitar + synth + guitar formation Matters will be supporting this event, who smashed their set at our end of year show at Centrala. 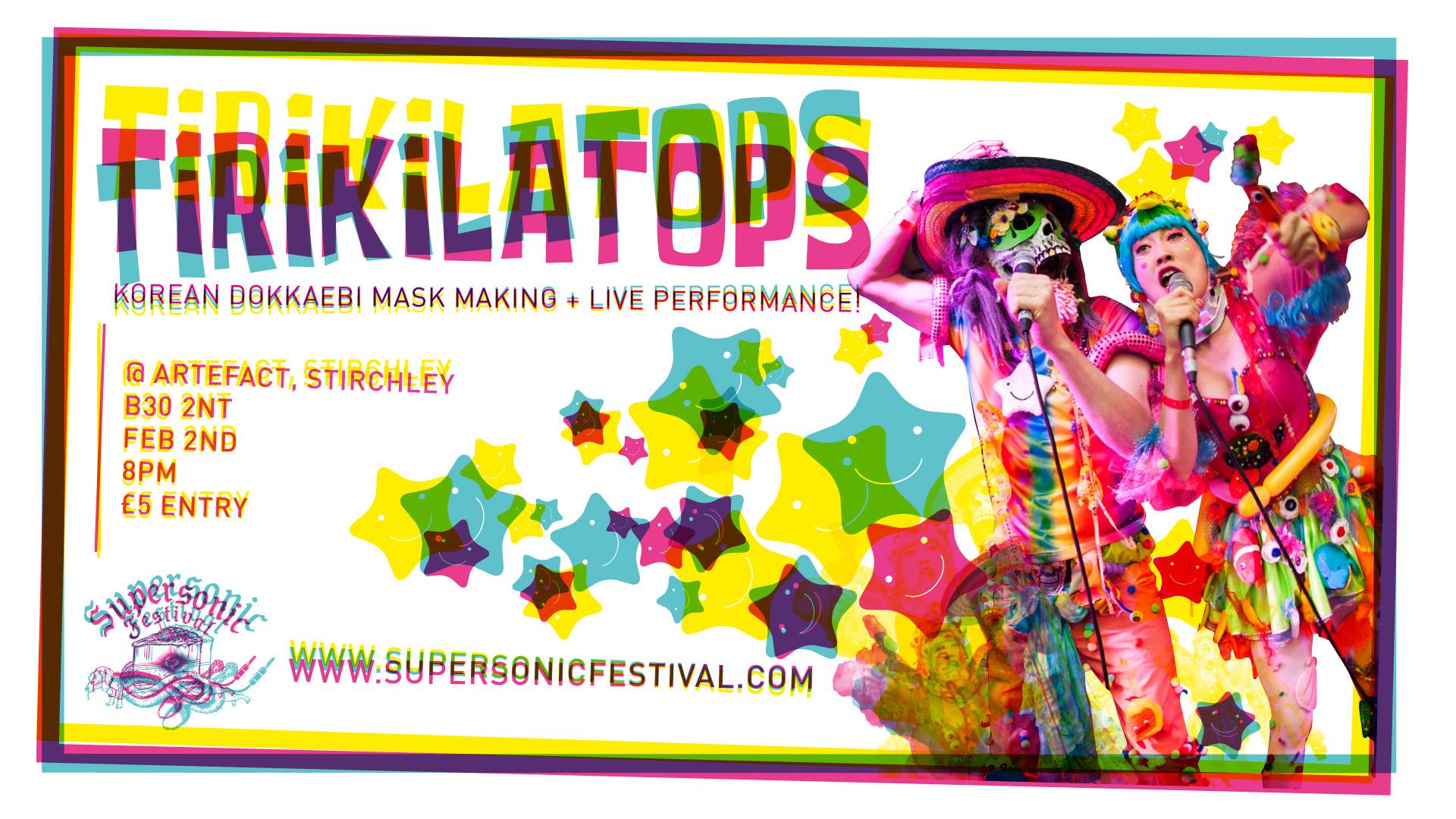 For a truly weird and wonderful Saturday night, join us in the lovely setting of Artefact in Stirchley for an evening of crafting and bopping with Tirikilatops. Acting as a pre-cursor to their Supersonic Kids Gig the next morning at MAC, we’ve invited the surrealist k-pop duo to lead a Korean Dokkaebi Mask making workshop followed by a live performance in this super intimate, relaxed local café because well, us grown-ups deserve some dada fun times too!

Come along for an hour or so of mask making over a lovely glass of vino, some local craft beers or a wonderful selection of teas & coffees, then finish it all off with a boogie to some Kimchi beats. Why not ey?!

Be sure to act fast for this one, with a limited capacity of 50 TICKETS.

Big Sounds for Little People. If you couldn’t guess from the snappy title, it’s a gig, for kids and their families, which aims to introduce children to experimental music at an early age.

This event is led by Tirikilatops, an avant-garde, cross-cultural, collaborative effort between UK and South Korean artists/musicians who you may remember from last year’s Supersonic Festival. Together they forge bizarre electro k-pop from an ingredients list that contains kimchi beats, pop sensibilities, offbeat lyrics, hacked keyboards and super earworm melodies. Their guiding forces are surrealism, dada, forteana and charity shop finds. This could be our most eclectic Kids Gig yet!

Recommended for children under 10, all children must be accompanied by an adult.

This live experiment with sound and substance will be conducted through a modular system made up of malleable plastics, coloured light and multi-channel audio which is constructed, choreographed and diffused by the artists into the performance space.

Tour support comes from DJs Copper Sounds who spin copper dubplates, ceramic pots, and heavy icelandic rocks, using these materials to create a primitive and tactile form of turntablism. They will also lead a daytime workshop at each tour venue, where participants can design and cast their own playable wax 7” and take it home with them. 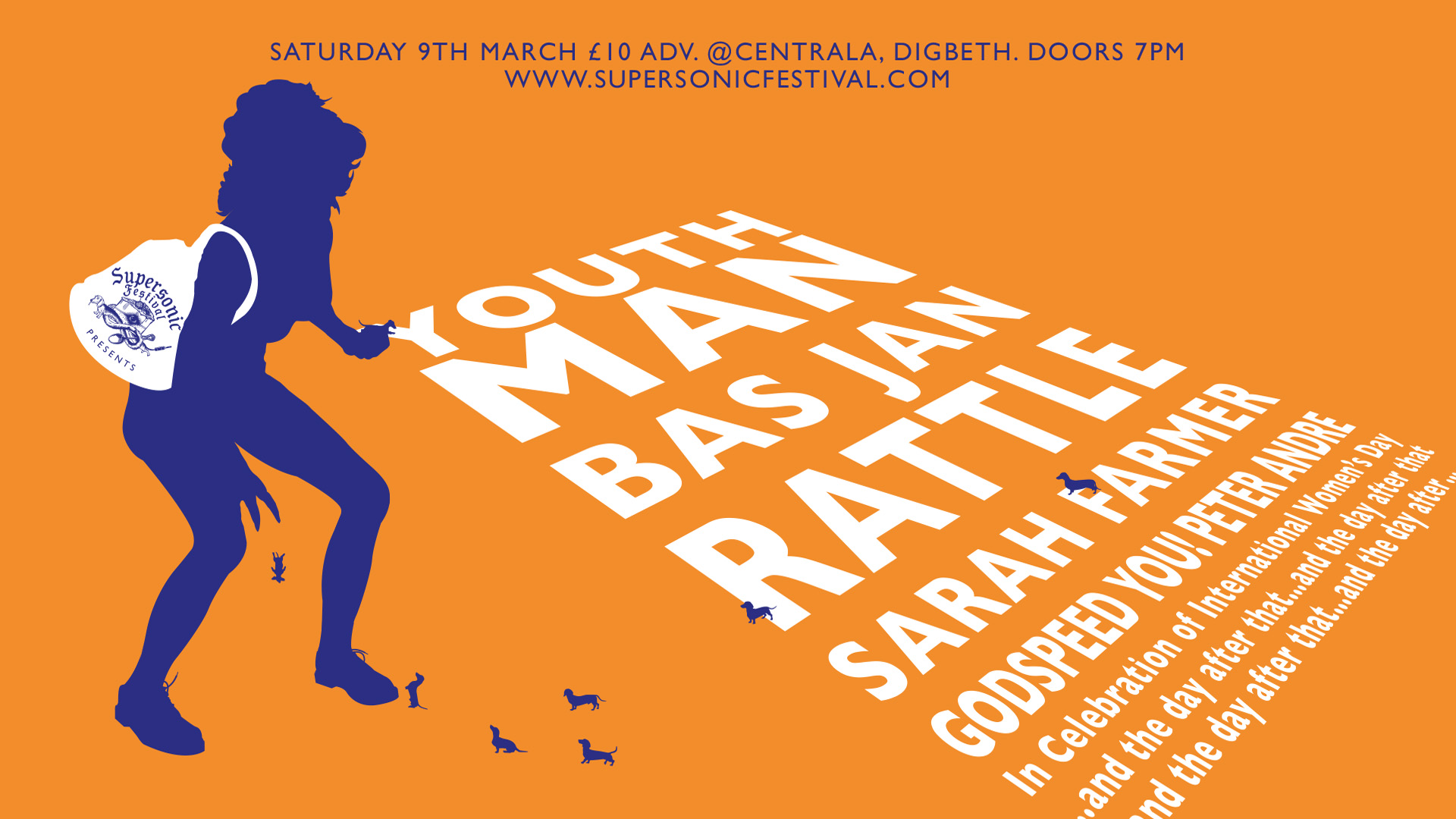 Headlining, as they bloody well should be, local faves Youth Man are set to smash up the stage with their raucous punk energy.

Plus DJs til late and of course, Glitter Station. 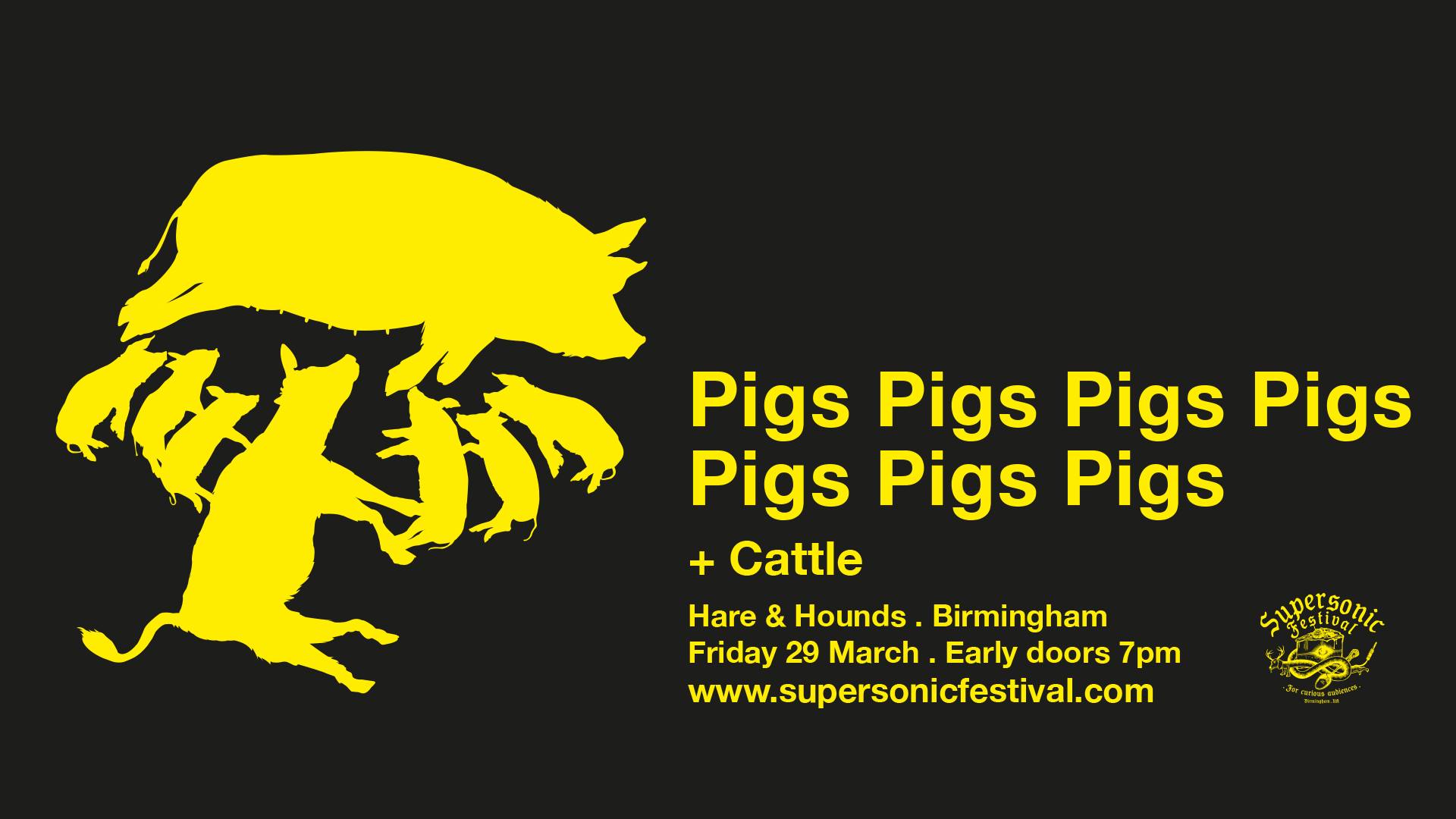 The Pigs return to the Hare & Hounds for this sold out show with Supersonic 2018 faves Cattle. Strap in for a night of double drumming, heavy riffs, sweaty Pigs and thundering hooves in an intimate venue- perhaps your last chance to catch them playing in space of this size. 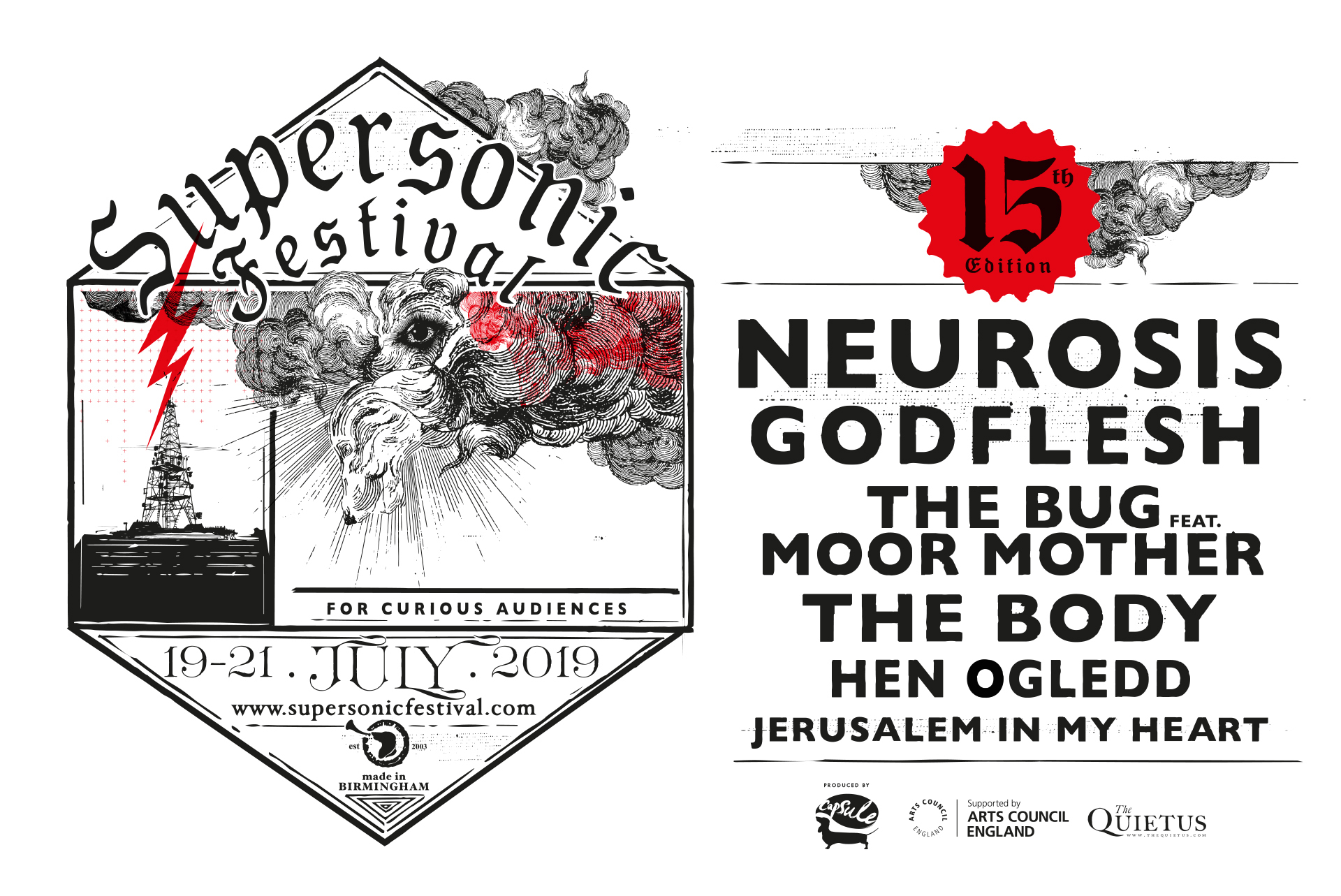 Supersonic Festival are immensely proud to announce iconic pioneers of heavy music, Neurosis as their 2019 headliners, with some more incredible names on the horizon for a programme that has you shaking in your boots. Supporting them are Brum legends and pioneers of industrial sound, Godflesh, which promises to be an unfortgettable experience. Justin K Broderick has a longstanding relationship with the Festival, as Supersonic have presented (and premiered) a number of his musical projects over the years.

Over in Digbeth across the 15 year anniversary weekend, Moor Mother shall bring her vicersally charged output, and unstoppable energy to an innovative new collaboration with The Bug – who first appeared at Supersonic Festival’s first ever edition back in 2003. Joining the dots between mutant strains of dancehall, acid ragga and grime. Joining them will be a mixture of intense, mesmerising live performances from The Body, as well as Richard Dawson outfit Hen Ogledd and contemporary Arabic audio-visual duo Jerusalem In My Heart (JIMH).

Be sure to keep your eyes peeled for further announcements around the festival for a Supersonic year not to be missed.