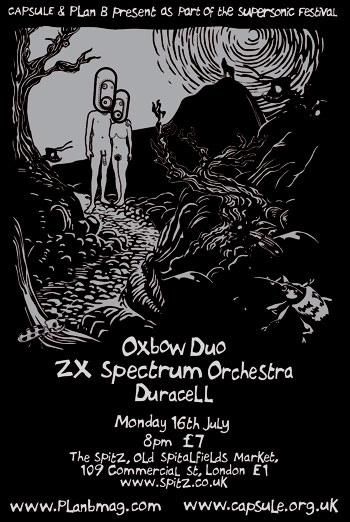 Oxbow Duo – http://www.theoxbow.com/
Eugene Robinson and Niko Wenner, the singer/lyricist and songwriter/architect of Oxbow’s mean mania, make the making of Oxbow music a thing of rarefied beauty using little more than the rudiments of guitar and voice for the non-electrical rendering of a terror no less absolute because of a lack of volume.

Exorcising demons, gang fights and classical guitars. From Milan to London to Berlin, The Robinson-Wenner Acoustic Duo, sits astride the low-fi fence like an ogre of less than obvious intent with its renditions of Oxbow’s musical back catalog, as well as music created specially for these rare events. A must see, hear, now.

ZX Spectrum is two of Birmingham’s leading sound artists Mike Johnston and
Brian Duffy. As ZX Spectrum Their initial purpose was to explore the
possibilities of working with a reduced palette in an era when computers
have become critically powerful, with the reduced palette in question being
Sir Clive Sinclair’s classic home computer from the 1980s the Sinclair ZX
Spectrum.
Mike Johnston was one time member of Warp act “Plone” and has been
performing his solo act Mike in Mono for the past 2 years. Brian Duffy
is  the instigator of the Modified Toy Orchestra (of which Mike is also a member) together they represent a group of artists and a sound that is unique to Birmingham and is highly respected within the experimental music circuit.

Check out ZX SPECTRUM ORCHESTRA ON YOU TUBE:
http://www.youtube.com/watch?v=hcRP1KVC6yU&mode=related&search=

Duracell www.myspace.com/andreduracell
Andrew Dymond, is a one-man band from Lyon, France. Initially an artist that only played live with a drum set, a trigger machine, and a synthesizer, heavily influenced by US noise rock act Lightning Bolt.