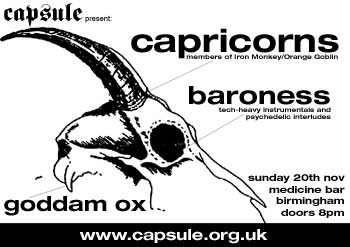 Straddling the fence between aggressive sludge and technical
fireworks, Baroness is carving out their own unique plot in the
ever-cramped world of underground metal. If these guys aren’t on
your radar yet you need to rectify that little oversight quickly.

www.c-a-p-r-i-c-o-r-n-s.com/
The
London, England based behemoth known as Capricorns was formed by four
men in the latter half of 2003 currently or previously involved in
projects as disparate as Iron Monkey, Orange Goblin, Bridge and Tunnel,
The Dukes of Nothing…the list goes on.

While the original impetus never went much beyond “does it slay?” the
music has developed over the past two years into a heady mix of bone
crushing brutality and dark, subtle beauty that has won over fans of
the Heavy Arts nationwide.

A heap of successful shows with the likes of Melvins, Pelican, Jesu,
Unsane and Oxbow to name a few quickly led to last years self titled
debut ep which immediately received abundant praise from the record
buying public and critics across the globe.

Emboldened by the ep’s initial success and reeling from a creative
watershed period in the House of Capricorns (their leaky Walthamstow
rehearsal room) the time seemed right to broaden their palette and
knock out a full-length album.

Recorded in a former GDR radio broadcast centre in Berlin, ‘Ruder Forms
Survive’ sees Capricorns up the sonic ante whilst still maintaining a
deep love for the purity and tradition of The Riff.

A refreshing departure from the po-faced, go nowhere excesses of their
instru-metal contemporary’s Capricorns have somehow succeeded in
combining the Armageddon punk attitude of Amebix with a doomed out,
Ummagumma era Pink Floyd propelled by deepest swing this side of John
Bonham. The icing on this blackened cake is The First Broken Promise, a
unique collaboration with Oxbow singer and raconteur Eugene Robinson –
first attempted onstage earlier this year at the Sounds Of Excess
festival in Birmingham and now committed to infernal wax and guaranteed
to scare the shit out of you.

‘Ruder Forms Survive’ is High Brow for the Low Brow, sophisticated yet
never shying away from ham-fisted bombast because, after all, that is
what drew us all to Metal in the first place.