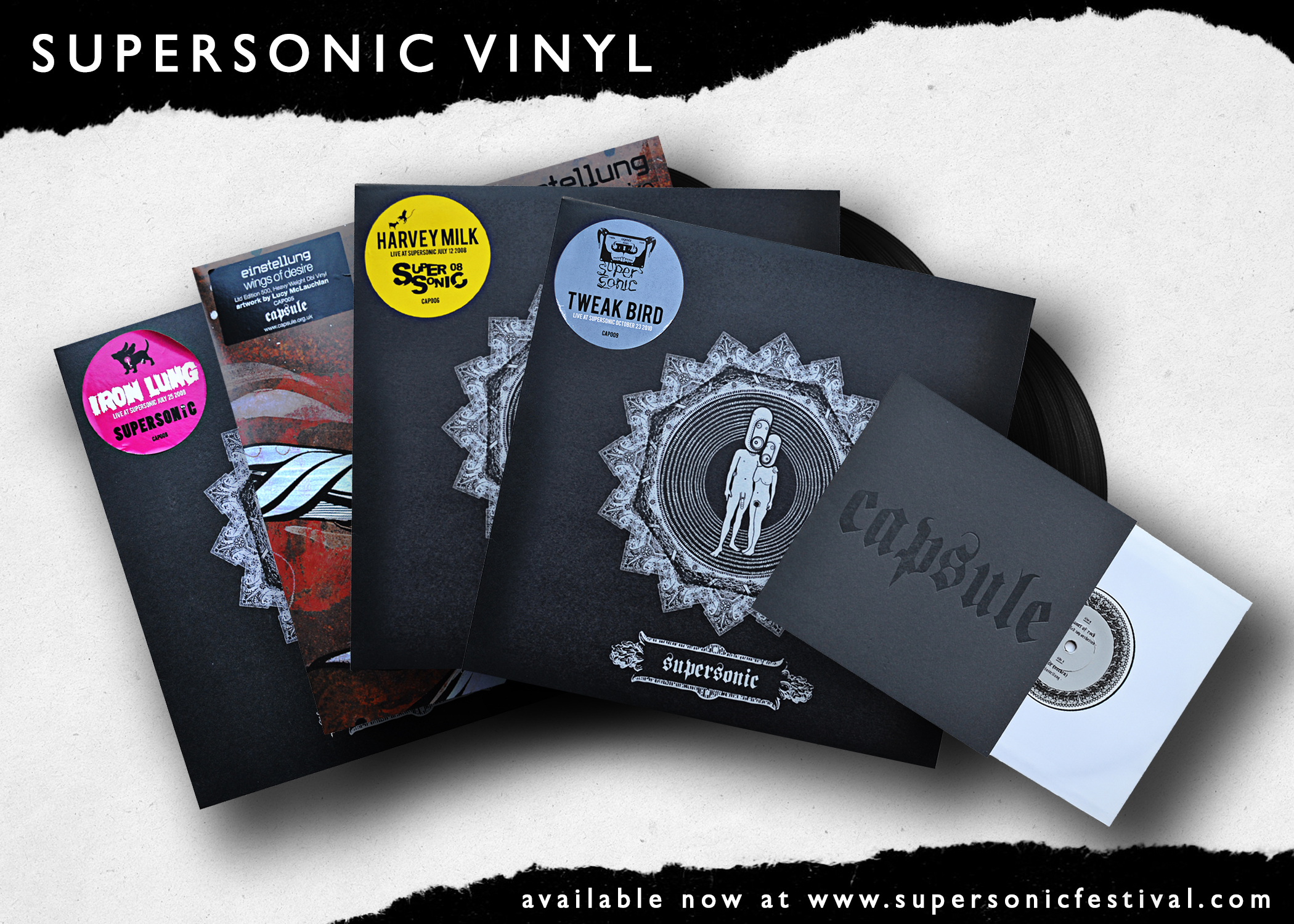 The Supersonic vinyl shop, is having its grand re-launch Saturday 26th September – in celebration of Record Store Day UK.

Expect pummelling live recordings from past festivals, alongside super limited edition gems from the Capsule Recordings archive. PLUS for a whole month, we’re offering a FREE mystery tote bag with your vinyl purchases. Time to fill in those gaps in your collections, folks!

So, let us tell you a bit about what’s in store… 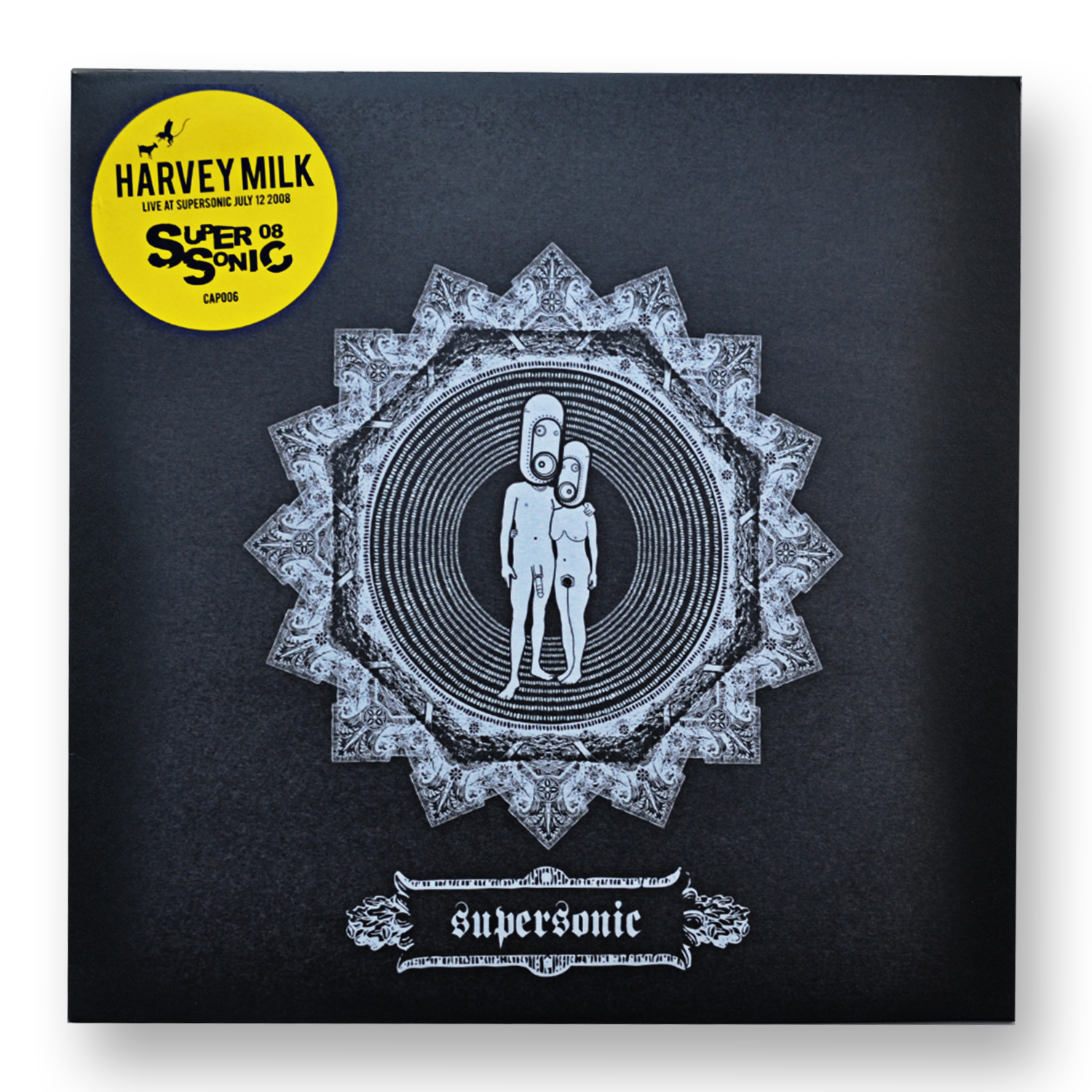 After much discussion Capsule managed to coax Harvey Milk out of America to play in the UK for the first time. Saturday night on the outside stage at Supersonic 2008 became a memorable occasion, with this long awaited performance providing a suitably raucous climax to the festival’s proceedings.

For their first UK performance, Harvey Milk certainly didn’t disappoint! To make it even more special, this live performance featured the legendary guitarist Joe Preston — a former band member of Earth, Melvins, Men’s Recovery Project, The Need and High on Fire (he has also played with Sunn O))) and has a solo project called Thrones).

We were equally excited to record this momentous live set and package it up as some Supersonic memorabilia. This is a special souvenir, so whether you’re reliving the experience or wishing you’d been there – we’re sure you’ll cherish it.

“Harvey Milk’s riff-heavy bombast was the surprise package of the weekend, and Saturday night belonged to them.” 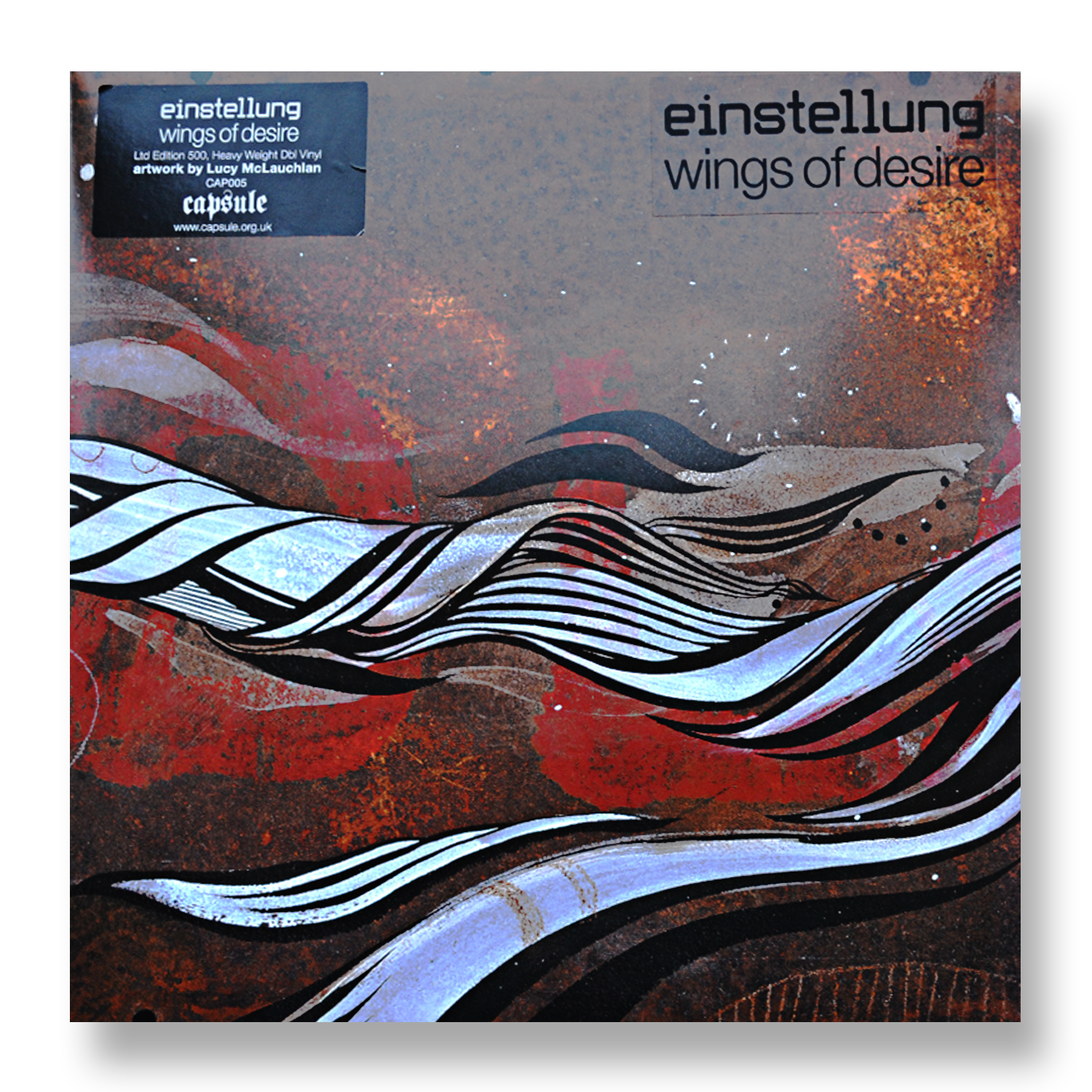 
From the deepest depths of the industrial heartlands of Middle England, Einstellung blend glorious monotonous Krautrock with melodic tones and heavy slabs of Sabbath riffage. Since late 2003, their warm glow has steadily grown into what can only be described as a fireball, declaring sonic warfare on those tinnitus victims who have passed the point of no return.

This rare Capsule Recordings release is from 2009 and is a must-have for any vinyl collection.

EINSTELLUNG feature ex-members of Godflesh, Sally, Katastrophy Wife, Cable Regime and Grover. Not attempting to reinvent the wheel, Einstellung’s manifesto is to enjoy each other’s company, produce music that makes them laugh/cry and through the use of dynamics and texture, create an all-engulfing sense of now.

“If Klaus Dinger and Michael Rother had undergone their musical educations in 1990s Birmingham instead of 1960s Berlin, the music they would have made together under the Neu! banner probably would have sounded a lot like Einstellung’s debut, Wings Of Desire.” 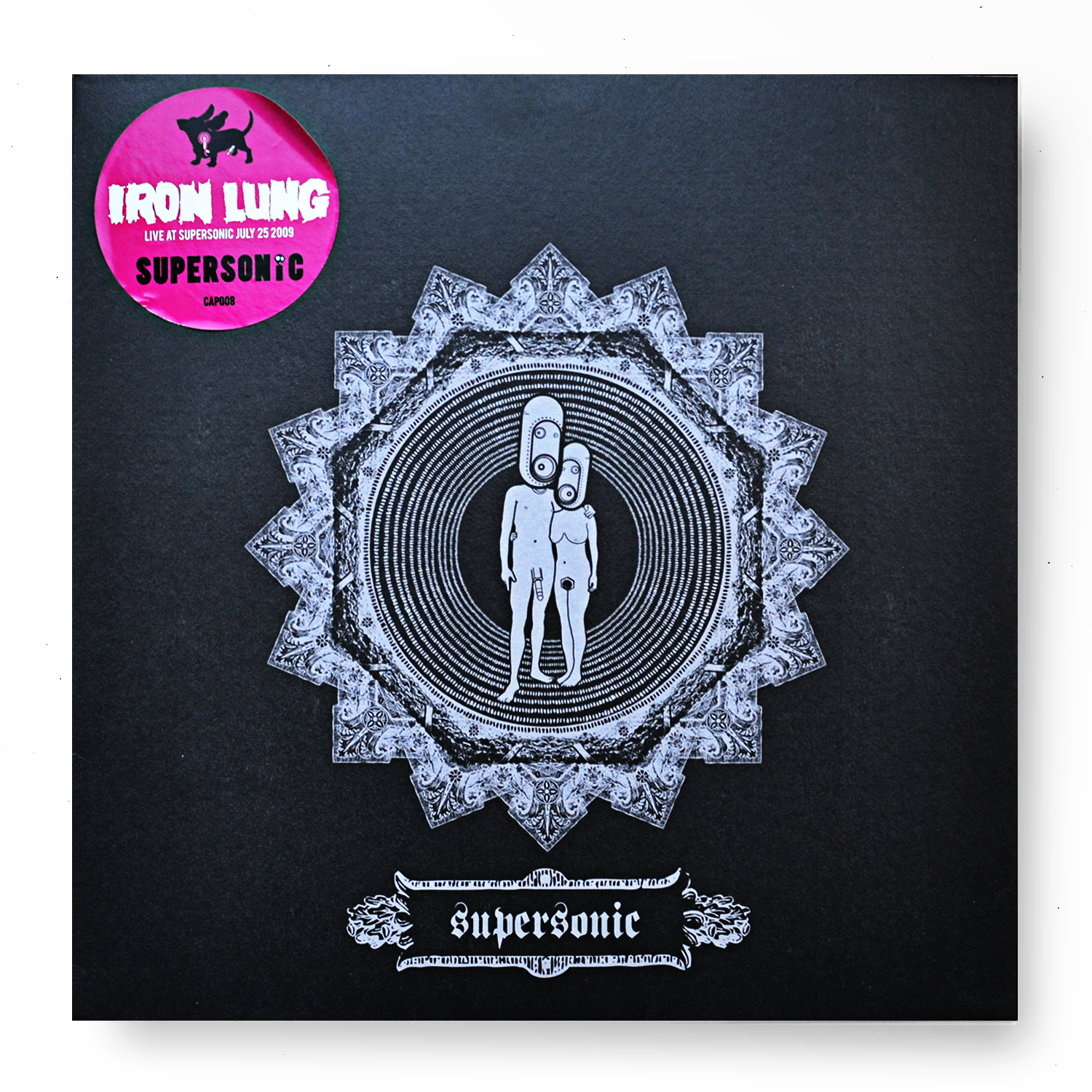 IRON LUNG are a two piece hardcore punk act from Seattle, Washington heavily influenced by power violence and grindcore. The band formed in 1999 and have since developed their own brand of audio violence. Bearing marks of grind, thrash, and even old-school hardcore, they are one of the handful of bands that have applied new and innovative approaches (arrangements, chords structures, thematic unities, etc) to their underground musical machinations.

Re-capture the spirit of Supersonic in these times of no-festival blues with some crushing hardcore paired with hilarious on-stage banter. This is an absolutely professional grade recording, even horror soundtrack legends Goblin used the same set-up!

“With the precision of a surgeon and the devastation of an unchecked disease, IRON LUNG wreak havoc on any listener smart enough to tune them in and turn them up. It blows my mind that a band can sound both so primitive and so precise at the same time.”

Ten years ago, we had the honour to invite the brothers Tweak for their debut Supersonic Festival performance. Heavy rock never felt so fun or so sugar-soaked! That year, they joined a line-up we were immensely proud of. Alongside Swans, Godflesh & Napalm Death, these fellas performed a swirling set of catchy and raw stoner-pop.

So here, on vinyl, we’ve captured one of our favourite performances of the 2010 weekend. Whether you’re reminiscing or hearing it for the first time, we hope you’ll add it to your record collection and enjoy this little piece of Supersonic history. 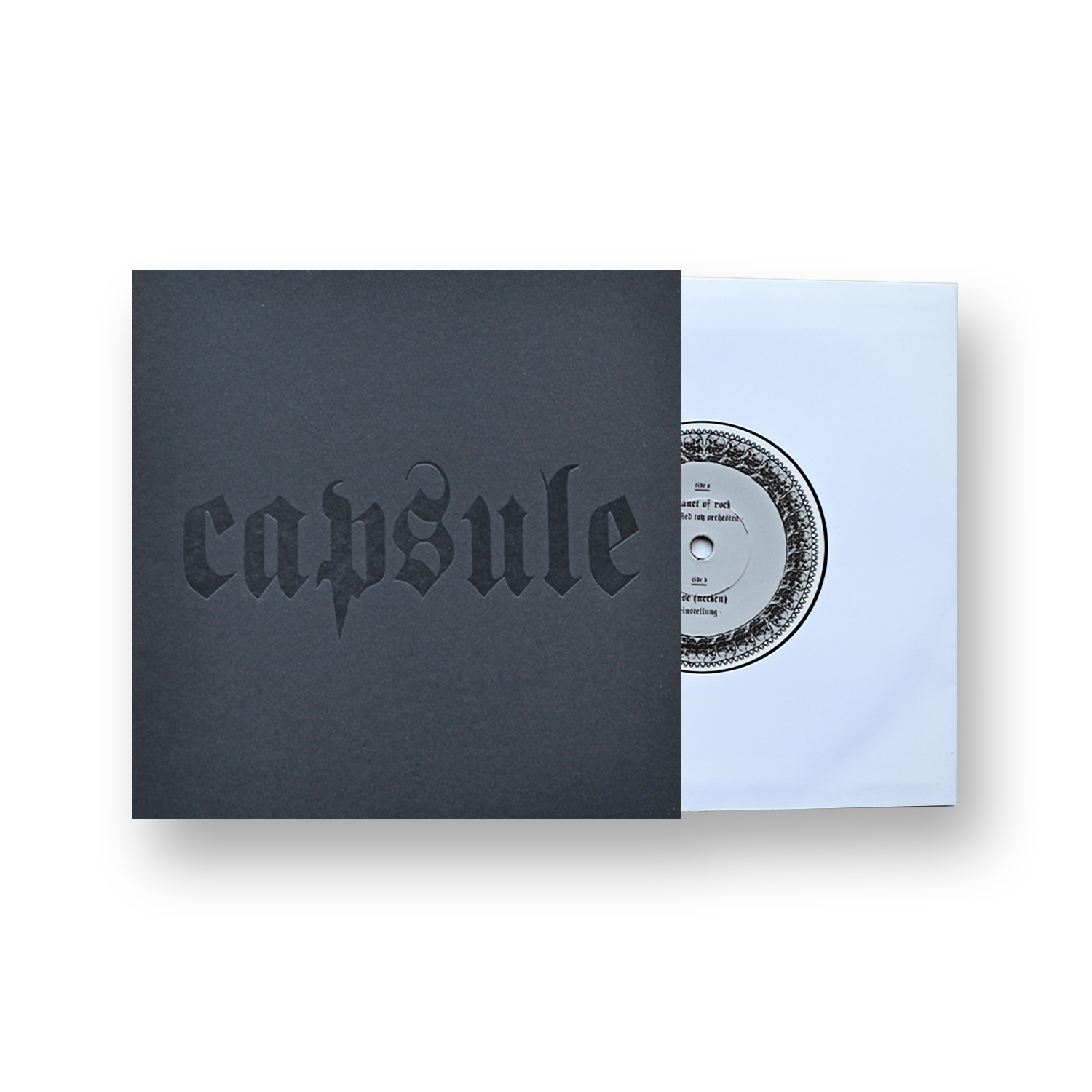 To celebrate a decade of Capsule, the producers behind Supersonic Festival, we produced this super limited edition 7″ Vinyl. With tracks by two of Birmingham’s most talented acts, Modified Toy Orchestra & Einstellung – this is a little piece of our history.

Included, is a beautifully designed 18-page booklet that commemorates our first ten years of crafting extraordinary events for curious audiences. From SUNN O))) shows in drained pools to the Giant exhibition way back in 2000, many memories are available to sift through and treasure. The package also comes with a Capsule badge!