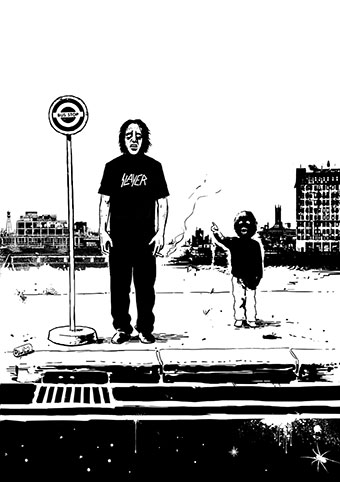 We’re delighted to be partnering with Ideal to host long time friend and supporter of all things Capsule, John Doran the editor of The Quietus. Doran is celebrating the publication of his first book – Jolly Lad – by going on a 31 date reading tour called An English Trip. He is teaming up with other writers, poets, film makers, musicians and DJs over the course of a month and putting on nights in prisons, churches, libraries, record shops, book stores, village halls, warehouses and cinemas and his musical support on every night of the tour is Kjetil Nernes aka Arabrot, the Norwegian noise rock musician.

“When I came up with the idea for An English Trip I wasn’t very well. I was not, let’s say, in my best state of mind. I’d just had a nervous breakdown and my doctor had advised that I spend some time as a voluntary inmate in a psychiatric facility. Normally when people have lengthy manic episodes terminated by a crash they are given medicine. I was given an Arts Council grant, a road map of England, a friendly Norwegian noise rock savant with his own van, a Stonehenge-looking assemblage of amplifiers, a BOSS Space Echo pedal, some print outs of poetry about black holes and a copy of JB Priestly’s English Journey. I talk a good game when I’m out of my fucking mind you see.”

Tickets are available from www.eventbrite.co.uk/e/an-english-trip-tickets-16433586299