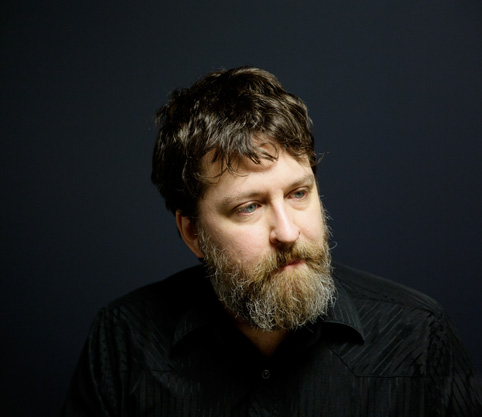 He lays the cards next to each other, building a virtual guitar neck across the table. He names each note as he goes: “This is a G,” he says, pointing to the three of hearts. The four of hearts is a G-sharp. He continues until he’s mapped 36 cards across the first three octaves of the guitar neck.

Six Organs of Admittance are performing at Supersonic Festival this year. Band leader Ben Chasny will also be hosting a workshop to explain his Hexadic System. Over the last two years, this restless intellect has assembled a comprehensive system of musical composition. The system is a catalyst to extinguish patterns and generate new means of chord progressions and choices.

WIRED Magazine published an article earlier this week in which Chasny explains the system, which was inspired by Ramon Llull, a 14th-century monk and progenitor of computer science. The Hexadic System gives its name to Six Organs’ latest album, out on Drag City now. Every song on the album was composed by the band using this system, an exhilarating departure in sound as well as concept.

If you’d like to learn how to make music using the Hexadic System from Ben Chasny himself, keep checking back here for an announcement about the opportunity to take part in a workshop with Ben during Supersonic Festival. Tickets available here via Kickstarter.

Listen to Hexadic by Six Organs of Admittance: