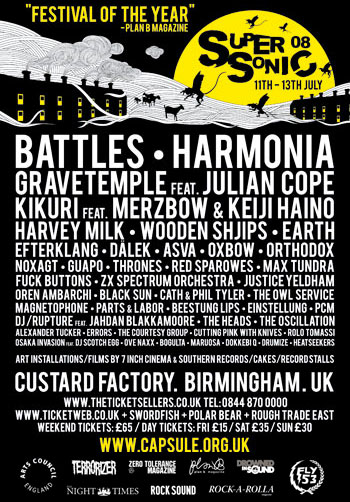 Please mark your calendars for the 11th-13th July 2008, for this year’s installment of what Plan B magazine called “the best organised and most wisely curated festival”. Taking place at the Custard Factory in Digbeth, with additional activity around the area.

Just added to the bill are GRAVETEMPLE featuring the living legend that is JULIAN COPE with STEPHEN O”MALLEY of SUNN 0))) fame, OREN AMBARCHI and ATTILA CSIHAR from MAYHEM! Also confirmed are ASVA, featuring Stuart Dahlquist (SUNN/ GOATSNAKE/ BURNING WITCH), TREY SPURANCE (Mr BUNGLE) and EDGY 59 (legendary vocalist from BURNING WITCH) who return to our shores for their first shows in two years, and an OSAKA INVASION in the form of DJ SCOTCH EGG, OVE NAXX and a load of other Japanese reprobates.

“The Custard Factory is a typical Birmingham name, typical in its self deprecating frankness. The city of Birmingham, although the second largest in the UK, has always had more of an inferiority complex than a chip on its shoulder. Hard to love architecturally despite a recent makeover of its city centre, it feels like a city shambling ruefully on – the West Midlands accent of its citizens considered inherently risible – its hopes of civic prestige some way south of the horizon. And yet, as Supersonic once again demonstrates, Birmingham has shown itself in recent years to be far from the “cultural wilderness” this writer once offhandedly described the city as.”
David Stubbs The Wire

“The finest thing in all Birmingham, avant-garde noise fest Supersonic fits more great music into. a day and a bit than ye Avalon fields of Glastonbury manage in the average decade.”
Duncan Bell Bizarre Magazine

Yvonne Maclean
[email protected] (with ‘SUPERSONIC PRESS’ in the subject) 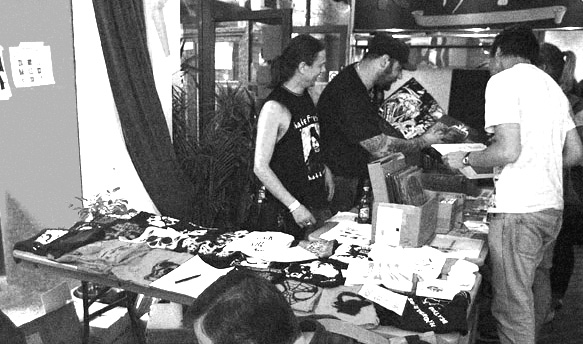 Conspiracy Records (Antwerp- Belgium)
www.conspiracyrecords.com
For the past 10 years Conspiracy Records has been swinging their tentacles in every possible direction. Changing landmarks and taking leaps into disorienting levels. With expertise knowledge of mutant underground subgenres they open gateways that’ll haunt your weirdest dreams. Be sure to swing by the distro set-up to get your mind and wallet crumbled.

www.deadwoodrecordings.co.uk
A DIY record label based in the Midlands, focusing on all things harsh, bleak and experimental. Started in 2006, Dead Wood Recordings primarily deals in short-run limited editions, challenging sounds and lovingly hand-packaged releases. Nothing positive!

www.iwantlalala.com
A company created by two childhood friends who have a love for all things stupid and fun, and the need to brighten up lives, not least their own!! With a wide selections of original designs, for boys & girls, printed on sweatshop free American Apparel t-shirts.

outcrowdcollective.blogspot.com
A shambolic visual collection of hoodlums and battered psyches, born out of a basic obsession to create. Not to be trusted with pen, paper or any other medium that can leave a mark. Initially formed amongst a group of friends, skateboarders, Illustrators, Designers, Image-Makers and Lurkers.

www.southern.net
Have been toiling away for the last thirty years establishing an independent alternative to the corporate structures of the music industry. A true working example of the DIY ethics of punk, Southern provide a home for labels as disparate as Dischord, Anticon, Southern Lord and now home to Capsule Records- each label leaders in their field and each displaying a unique character that holds true to the independent spirit.

www.splitfemurrecordings.com
An independent label based in Stafford and York. Founded in 2006 by Birmingham born Alan Daly, who himself is one of the artists on the roster, working under the curious moniker of Emvelope Nine. The label has a strong leaning towards electronic and experimental music including hip hop, post-rock and noise. The first release was Planivaar’s ‘The Yellow Square’ released back in March 2007 and has since been releasing albums by Guy Gelem, Eight Pence Chains, Hurra Caine Landcrash, Navidson Record, Progress Centre, Um Fall Am and Horses

www.superfirecords.co.uk
A label and mail order based out of Bristol. It has been involved with over 40 releases over its 8 year existence, and has worked with such bands as Army Of Flying Robots, Art Of Burning Water, Boris, The Death Of Her Money, The Endless Blockade, End The Agony, Geisha, Hunting Lodge, Jinn, Melt Banana, Moss, Narcosis, Orthrelm, Snowblood, Swarrrm, Taint, Trencher and many more. The mailorder carries a wide array of punk, hardcore, doom, metal, stoner, grind, noise and electronica from all over the world.

www.honeyisfunny.com
A one-man illustration company founded in Nottingham in the year 2000, specialising in the design of gig posters. In direct contrast to the ’boutique’ poster industry, The Speeding Train only designs posters to be printed for genuine gig promotion. Gig posters in the genuine sense of the word. Stuck up on walls and in shops and venues and then torn down a few days later. Heavyweight litho-printed A3 versions of around 100 different designs are available to buy from the stall at this year’s Supersonic Festival.

Taylor Johns is the Tin Angel’s big brother. Opening in April 06, to hold a growing audience, TJ’s is one of the Midlands’ premier Leftfield music venues.

Wonderleague
www.wonderleague.co.uk
Selling vintage clothes and ephemera from the 50s to the 00s, trading cards and collectibles, music memorabilia, deadstock gems and forgotten treasures. WONDERLEAGUE is home to Bunny Bissoux and also sells fanzines, artists books, prints, badge sets, handmade plush toys and one off items of clothing and accessories, all this and cupcakes too!! We have all the things you never knew you needed.

Friday £15 / Saturday £35 / Sunday £30
Please be aware we have a limited capacity last year sold out, so you are advised to buy tickets in advance of the festival. 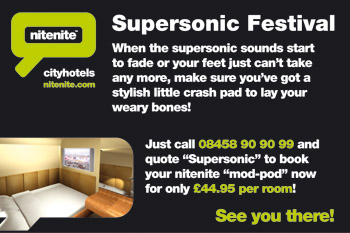 (2 mins walk from the Custard Factory)
A magnificent example of Gothic architecture, the Paragon is situated in the heart of the city, lovingly restored into a modern, stylish, urban retreat. 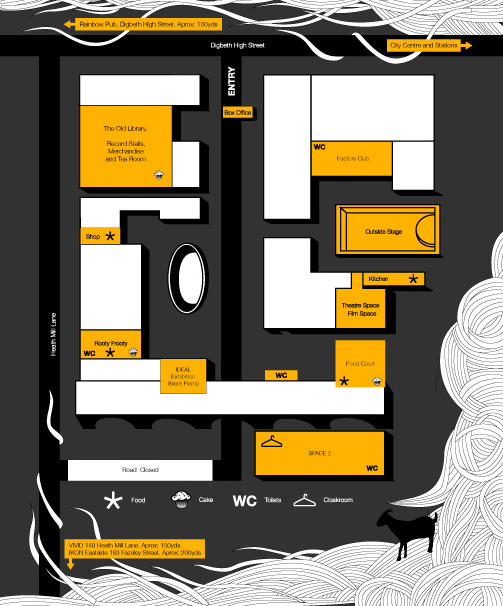 Supersonic needs YOU! Capsule¹s internationally renowned festival runs 11th to 13th July 2008 and there¹s plenty of opportunities to get involved as a volunteer. The festival is small enough for everyone involved as a volunteer to gain not just an overview of how the festival works, but to give real input and value. We will try to fit your experience and aspirations against required roles in the festival, so that we all benefit as much as possible

There are 2 festival internships available to assist with: Artists liaison / Production / Marketing / Festival Management you will be required to do 5 -10 days between May to July. You will receive valuable work experience and be credited as part of the core team that deliver Supersonic Festival.

In addition to this we need a team of volunteers to help deliver the festival over the weekend of the event itself 10th-14th July and in the run up to Supersonic from June onwards. You will be required to do a minimum of 6 hrs over the weekend in return for a day ticket and festival t-shirt.

We will need to know, very specifically, when you are available to volunteer for Supersonic. This enables us to timetable volunteer hours in the office,at events and liaising with artists and onsite. It’s really important that if you’ve said you’re available at a particular time on a particular day, we can rely on your presence. Please look at your diary and let us know what commitments you already have.

Please note, unfortunately we can only receive applications from people over 18 years of age. For further information on volunteering for Supersonic, please contact us by email: [email protected] with ‘volunteer’ as the subject field.