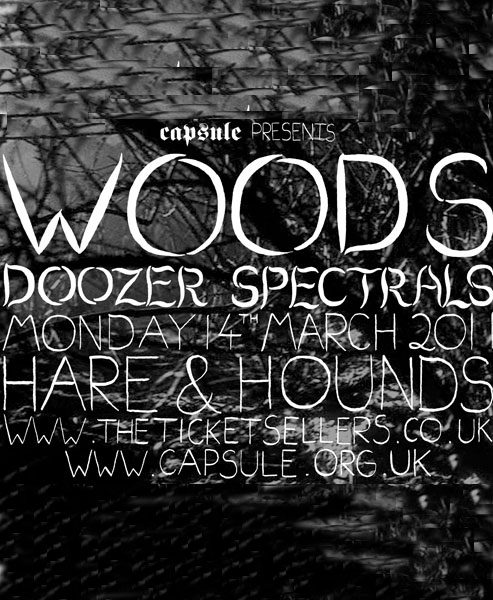 WOODS are primarily the duo of Jeremy Earl (owner of Fuck It Tapes and Woodsist) and Jarvis Taveniere (Meneguar and Wooden Wand), and aided live by friends G. Lucas Crane on tape effects and Kevin Morby.

Both tracks feature on their recently released fourth album, ‘Songs of Shame’, released through their own Woodsist label and cassette tape label Shrimper.

Spectrals, the brainchild of L; a stand-up guy from a small town near a few bigger ones in the top half of the UK. With a heart firmly wrapped up in doo wop, girl groups and not a little tape hiss fuzz, Spectrals is a one-man teen dream with Rat Pack flair and a punk rock eye. When not getting upset over people talking about his band on the internet, Spectrals has been known to enjoy Red Bird & Cash Money Records, “Slush” based beverages, writing to Phil Spector in prison, and NYHC in the 1980s.
http://www.myspace.com/spectralspectral

“A recent show that blew all attending asses out of the water was a short gig by a Cambridge UK duo known as The Doozer. The Doozer actually seems to be one guy, and his playing partner is called Ben, but never you mind. Anyway, they have a new LP out on Siltbreeze called Great Explorers (the CD is on the UK Pickled Egg label) and it is a gas and a pleasure of great dimensions. The lazy man’s way to review it to call it a bridge between Syd B and Chris Knox, carrying all the weird damage and superb left field pop motion that implies. The earlier single, “Conversations/Stone Houses” (Doozer Industries) carried whiffs that are fully explored hereon. There is also an earlier LP on Pickled Egg, Sheet Music. We can’t lie and claim we’ve heard it, but there’s no way it’s not a stunner as well”. – Byron Coley / Thurston Moore