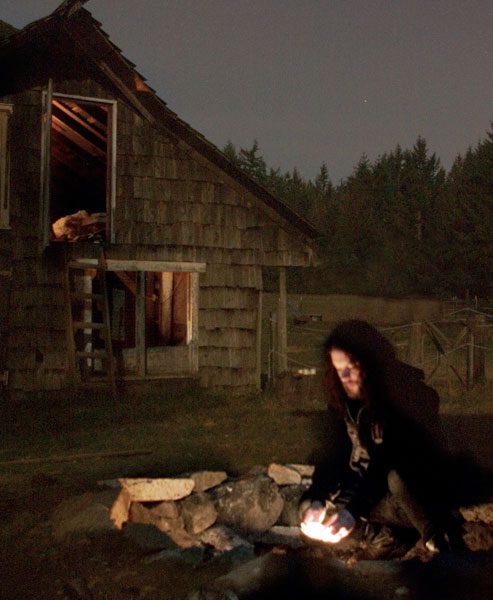 It has been five years since Wolves in the Throne Room emerged from the rain-soaked Cascadian underground with a singular musical alchemy. The band’s previous two studio albums, Diadem of Twelve Stars and Two Hunters, in tandem with their incendiary live performances, have unquestionably established the band as a swiftly rising force in the extreme music world.

Their new meditation, cryptically titled Black Cascade, will be released by Southern Lord in the Spring of 2009. With this record Wolves in the Throne Room wholly transcend the limitations of the black metal label to be reborn as an entity entirely unto themselves. The energy conjured by the music is a distinctive manifestation of a personal vision that is not beholden to the rules of any genre.

Black Cascade is characterized by a heavy and powerful analog sound and a deft touch with songwriting and arrangement. The crumbling roar of decidedly old-school tube amps unite with layers of mossy analog synthesizer and cataclysmic percussion. Blazing and crystalline Metal riffs slowly collapse and shift into ritualistic dirges that invoke endless rain falling upon the ancient cedars of the pacific North West. It is as if the instruments are controlled by shadowy and elemental forces of nature rather than three forest-dwellers from Olympia,WA.

Tweak Bird is a brother duo consisting of Caleb and Ashton Bird. Produced under the helm of Deaf Nephews (Melvins’ Dale Crover and Altamont’s Toshi Kasai), the duo’s debut is a sweeping seven-song intro to a band exploring the depths of heavy experimental, progressive, and psych-infused rock. A sort of musical Armageddon that’s constantly on the horizon, looming. Tweak Bird has played shows with the Melvins, Ancestors, Earthless, and many others.
www.myspace.com/tweakbird