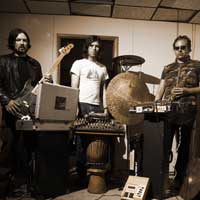 Wolf Eyes –
Featuring Mike Connelly of noise kin Hair Police, he moved up to Michigan at the end of 2004 and has been jamming with Olson and Young in various projects, leading up to his introduction into Wolf Eyes. The band’s recent shows have been a return to a much more primitive and raw approach to the bands own version of Armageddon (which includes brews and Negative Approach’s “Ready to Fight” on repeat
http://www.myspace.com/therealwolfeyes