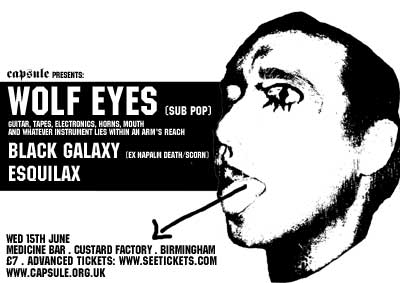 In 1996 Wolf Eyes begins life as a single individual residing somewhere in the sprawling Metro Detroit labyrinth. Nate Young is Wolf Eyes, generating noises with electronics, programming, voice and whatever instrument he can (re)construct. Aaron Dilloway releases a few near-extinct cassettes of this initial Wolf Eyes incarnation on his Hanson imprint then he joins the group full-time, generating noises with guitar, tapes, electronics, horns, mouth and whatever instrument lies within an arm’s reach. Wolf Eyes (as two) tour and record incessantly. A steady stream of quick-to-vanish cassettes, split LP’s, lathe-cut records, and CD-R’s, flows into the general population.