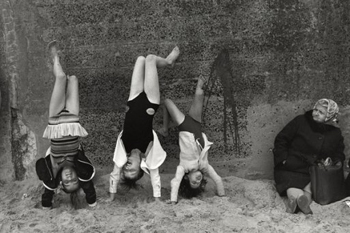 Participation is an exhibition and archive project centred on the emergence of new film forms, politics and practices in the 1980s. Unearthing the archives of challenging, polemical and oppositional groups operating during a period of economic and social upheaval, the works presented react to and document the rise of Thatcherism and the social and cultural events the period from 1979 engendered: inner city disturbances, the miners strike, and increasing social disparity.

Presented in two parts, Participation brings us rarely seen works from key film and video workshops and groups who, motivated by a desire to effect social change, forged new approaches to political and social themes that emerged nationally. The show includes works by Amber Films, Black Audio Film Collective and Sankofa amongst others, and has a special focus on the Birmingham Film and Video Workshop.

VIVID is a leading media arts agency committed to the development of media arts practice through research, production and commissioning programmes.   VIVID’s space is open to the public for a wide range of activities including exhibitions, talks and screenings and the programme aims to reflect the development of artist’s film and video through a juxtaposition of historical and contemporary practice.