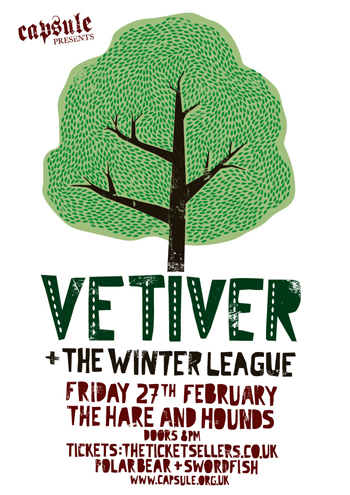 Vetiver released their debut album in 2004 on the small indie folk label DiCristina. Since the album`s release Vetiver has toured extensively, opening for and collaborating with Banhart and Joanna Newsom. Before moving to San Francisco, Cabic was a member of the Greensboro, North Carolina indie rock band The Raymond Brake who released some records on the now defunct Simple Machines label. The band shared the bill with Vashti Bunyan on her US tour in early 2007.

The band is named after the grass, vetiver. Their music has been described as `surreal`, `lullingly pleasant`, `tender and accessible` and `quirky and warm`.
http://www.myspace.com/vetiverse