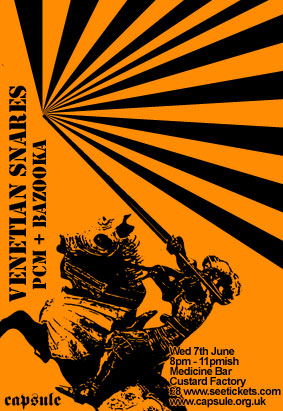 Venetian Snares is nothing if not prolific, with releases across
a swathe of underground imprints like History of the Future, Zhark
and Hymen before finding his spiritual home on Planet Mu. Aaron
Funk’s twisted vision renders labels like breakcoreâ or drill and
bass hopelessly inadequate: Hyper-tensile jungle breakbeats twist
into an impenetrable Piranesi-esque mockery of drum n bass
pseudo-sophistication. With more hyper-complexity and
time-signature shifts than a King Crimson LP, V-Snares doomrush
break-tronixx impossibly pushes up the funk intensity into the red.
His latest album Huge Cylinder Box Unfolding has just been released
on Planet Mu, and is a fine example of his caustic nervous-tic
death-funk!!

PCM were formed in 1990 by Neil Harvey and Nik Wells in
Birmingham,UK Starting life as PCM Soundsystem, they began hosting
parties in warehouses and empty buildings in the B’ham area and
travelling to free festivals and outdoor parties with their sound.
Playing an eclectic range of music from acid to hardcore to early
jungle and often performing their own material live, they soon
built up a large following in the emerging underground dance scene
in the Midlands. After a nationwide clampdown on illegal parties in
1993, PCM started the infamous “CHAOS” club at local venue, the
Moseley Dance Centre later moving it to the Circus club in Balsall
Heath. With themselves as residents and playing hosts to guests
such as Hyper On Experience (moving shadow), Dj Edge (edge/rabbit
city), Ratty and Fallout, the club ran till ’96 and achieved near
legendary status as a mecca for those who liked their drum n bass
dark and heavy. In 1995, PCM remixed “The End” by SCORN for their
remix album “Ellipsis”. Despite being relatively unknown and in the
company of such luminaries as Coil, Meat Beat Manifesto, Autechre
and Bill Laswell, the PCM mix gained excellent reviews both in the
UK and abroad. This led to an ongoing relationship with Mick Harris
which has seen PCM play with Scorn in
France,Holland,Belgium,Germany,Czech Republic,Austria and
Switzerland as well as a 12″ ep on Harris’ now defunkt Possible
records and a solo project with Neil Harvey on Sub Rosa entitled
‘Shortcut to Connect”. Since then, PCM have had releases on labels
like Law and Auder, Domino, Manifold and EST and have done gigs
with Mike Paradinas, Aphex Twin, Luke Vibert, Scanner, Gary Clail,
D’arcangelo, Zion Train, Lords of Acid and Test Dept whilst
individually Harv has completed solo remix projects for Sub Rosa
Records and international reggae artists Steel Pulse as well as
touring the US with Scorn, Pigface Dead Voices on Air and FM
Einheit. Nik has Dj-ed with the likes of Roni Size, LTJ Bukem,
Nicky Blackmarket,Randall and is a resident at legendary techno
club, House of God. PCM have also done several projects with
Birmingham Jazz including the finales of Artsfest (massive annual
Bham arts festival) in ’98-’00 and a project called Edge of Motion
with various Bham Jazz musicians (inc. Chris Bowden-ninja tune).
PCM continue to play live on a regular basis. Recent live
performances for local promotion organisations Capsule and Drop
Beats Not Bombs have produced critical aclaim from the Independant
online and The Wire magazine. This summer sees PCM making a debut
appearance at The Glade Festival, with an appearance the week after
at the now legendary Supersonic Festival with DJ Food and The
Bug.