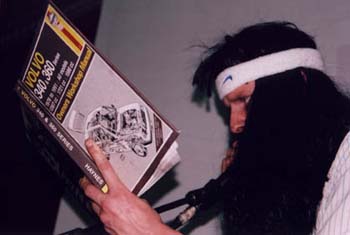 DEADSUNRISING: From the depths of West Bromwich, deadsunrising have come to toy with your preconceptions of how a 21st century metal band should sound. With a lineup of six members, deadsunrising are rapidly being acknowledged as the most devastating live attack that the Birmingham scene has seen in years. There is not a safe haven in the entire room once DSR have kicked in, with vocalists and guitarists spreading across the venue like bacteria, with scant regard for personal well-being.

UNCLE JOHN & WHITELOCK they sound a little like the birthday party, though they discribe there sound as ‘horror r+b’. uncle john (vocals and rhythem guitar) is the whaling fanatic and owner of the most feared voice in the west of scotland. whitelock (bass) the ‘worrysome mystic’ .mick (hashfinger) on lead guitar and oval body the drum technician. originally from Bora (pronounced bow-ray) the most western island in scotland, their music scares the living piss out of the unsuspecting audience.