As our team are currently working from home, they will be posting out merch less frequently. Please allow up to 14 days for your order to arrive. Thank you for your patience.
Back to 2012 Line Up
Sun 21st October 2012
This is an archive item from Supersonic 2012 Theatre 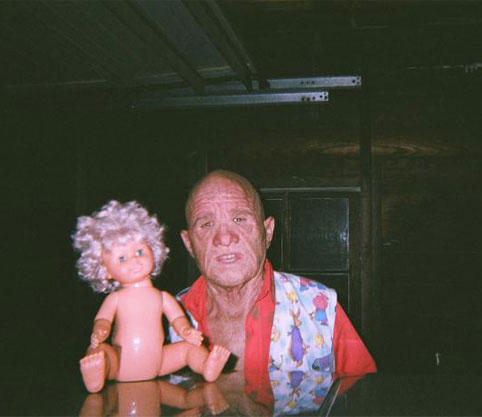 Walking his dog late at night in the back alleys of his hometown of Nashville, Harmony Korine encountered trash bins strewn across the ground in what he imagined as a war zone. Overhead lights beamed down upon the trash in a Broadway-style that Korine found very dramatic. They began to resemble human form, beaten, abused and “very humpable”. Korine remembered, as a teenager growing up in Nashville, a group of elderly peeping toms who would come out at night. He has described them as “the neighborhood boogeymen who worked at Krispy Kreme and would wrap themselves in shrubbery, cover themselves with dirt, and peep through the windows of other neighbors.” Putting these two ideas together, Korine found conception for this film.
Trash Humpers is a 2009 American drama film directed by Harmony Korine. Shot on worn VHS home video, the film features a “loser-gang cult-freak collective”and their whereabouts in Nashville, Tennessee.