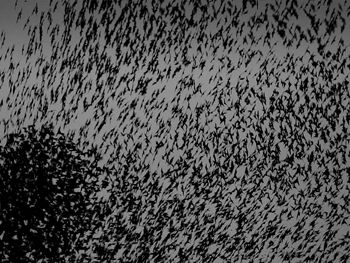 Supersonic Installation: ‘There Are No Others, There Is Only Us’
video installation by Marc Silver / Music by Ben Frost

Premiering at Supersonic Festival ‘There Are No Others, There Is Only Us‘is a monochrome video projection created by director Marc Silver, which explores how we protect ourselves from a seemingly more chaotic planet.

In a time where the world is ever more connected and unbordered, artist Marc Silver considers whether crowds are a force for oppression, or a potential for resistance.

‘There are no others, there is only us’ is a powerful visual metaphor illustrating the nature of collaboration and the power of crowds, with music composed by post minimalist producer Ben Frost (Bjork, Valgeir Sigurosson).

The centerpiece of the film is an aerial dance of half a million swarming birds, projected at Birmingham Moor Street Station, where 7,000 commuters come and go daily.

In addition to Ben Frosts soundtrack 5 artists have been invited by Supersonjic Festival to compose alternative scores to accompany the film. These include pieces created by:
Andrew Moscardo-Parker, Stuart Tonge, Simon Fox, Matt Snowden, Sam Underwood

Produced by Capsule + Germination in association with Fierce!
With thanks to Chiltern Railways

Fierce! is an international performance festival that has taken place annually in and around Birmingham, England since 1997.
www.myfiercefestival.co.uk