As our team are currently working from home, they will be posting out merch less frequently. Please allow up to 14 days for your order to arrive. Thank you for your patience.
Back to 2008 Line Up
Sat 12th July 2008
This is an archive item from Supersonic 2008 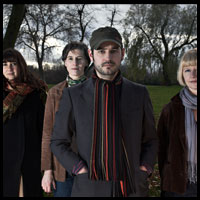 The Owl Service formed through a mutual love of British films and television of the 1960s and 70s, the great outdoors and {of course} the sound of the English folk revival. No retro obsessives, The Owl Service simply believe that music production peaked around 1969 and they merely seek to perfectly encapsulate the influence of the greatest albums and artists of that time. Beautiful music, simply arranged, exquisitely executed and captured on tape with authentic warmth – prepare to be enchanted by The Owl Service.
http://www.myspace.com/theowlservice