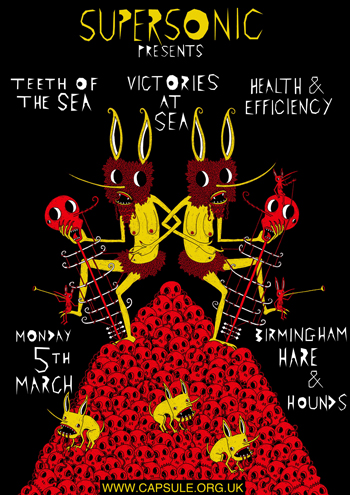 Teeth of the Sea is a psychedelic rock band from London. The group (Sam Barton, Mike Bourne, John Hirst and Jimmy Martin) were inspired to forge forth in search of oblivion unknown after experiencing an epiphany during a Wolf Eyes gig.

After the release of their January 2009 album ‘Orphaned By The Ocean’ on Rocket Recordings John Hirst left the band, to be replaced by Mat Colegate. After a tour with Oneida, an appearance at the Offset Festival, and November’s ‘Holy Trinity’ tour with Gnod and Thought Foms, Teeth Of The Sea released the twenty-four-minute-long ‘Hypnoticon’ EP in January 2010. and their second album, ‘Your Mercury’ was released in November 2010. 2011 saw them tour with British Sea Power, Esben & The Witch and Parts & Labor, as well as playing the Supersonic, Standon Calling and Supernormal Festivals, along with dates with Circle, Crippled Black Phoenix and Vessels. . A third album is planned for later in 2012, also to be released on Rocket Recordings.

Their music traverses an encyclopaedia of influences; psych, folk, no wave noise and electronic perhaps being some of the more predominant. They utilise banjo, two basses, two guitars, synths, samplers and more effects and loop pedals than it’s reasonable for one band to need.
http://healthandefficiency.net/

Victories At Sea are an experimental 3 piece from the Midlands, citing influences as wide and diverse as Slowdive, Boards of Canada, and M83 through to more unadulterated alternatives such as Echo and The Bunnymen, New Order and mid 80’s Cure. By using various electronics and drum loops live, their traditional set up is enveloped by resonating layers of sound cast against the backdrop of the city at night.