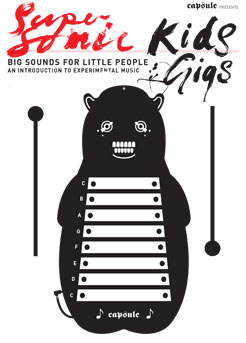 Ever since Schoenberg and Kandinsky became pen pals back in 1907, avant-garde art and experimental music has been attempting to find some common ground. But, it’s not been easy. Here’s Capsule’s contribution towards a solution: Supersonic Kids Gigs ‘Big Sounds for Little People’. If you couldn’t guess from the snappy title, it’s a gig for kids and  their families, which aims to introduce children to experimental music at an early age. Kids Gigs provide a fantastic opportunity to show children the beauty of live music.

We’re delighted to have been invited to the wonderful Supernormal Festival in Oxfordshire to deliver a Supersonic Kids Gig. Leading the Supersonic Kids Gig are Woven Skull, The trio spent several years experimenting with combinations of instrumentation, household objects, kitchen utensils, seashells, footsteps, chimes, recordings of cats purring and frogs mating while developing a sound that after a recent set was described as ‘a Turkish Velvet Underground.’
wovenskull.bandcamp.com/