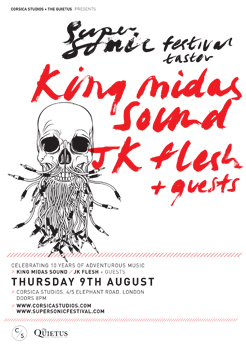 Supersonic Festival, the world renowned event for adventurous music, art film and beyond is celebrating its 10th birthday.. We love a party so are expanding our celebrations by hosting two very special taster shows in London and Birmingham in August.

Godflesh, Head of David, Napalm Death, Techno Animal, Jesu, Greymachine, Palesketcher – just some of the projects from the insanely prolific Justin Broadrick who this year raised his Techno Animal moniker JK Flesh from the dead to promote his recent album Posthuman. Once again proving his mastery of all things brutal. This material will be showcased for the first time in the UK all thanks for Supersonic. Expect soul-crushingly dark beats and bass, layered with Broadrick’s inimitable guitar and vocal fuzz, that will resonate with fans of Godflesh and the post-dubstep landscape alike.