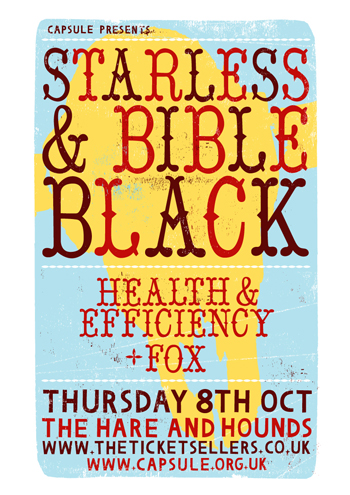 Moving on from their well-received eponymous debut, Starless & Bible Black have drawn together the sounds of ‘70s Topanga Canyon country-rock, ‘80s Mancunian jangle, and space-age psychedelic drones to make this dynamic, warm and woodsy second album. Gone are the dulcimers and banjos of the first record, replaced by an electrifying wall of Telecaster and Moog, and standing in the centre of this bold, widescreen sound resides the earthy and husky voice of Hélène Gautier.

Starless & Bible Black were formed in Manchester in 2005 when Hélène Gautier, guitarist Peter Philipson and synth man Raz Ullah started performing live together and they were soon joined by Paul Blakesley on double bass and Brian Edwards on drums. Drum duties on recent recordings were performed courtesy of Karl Penney, another friend of the band.
Their first record was released in 2006 to unanimous critical acclaim most notably from Pitchfork, Wire, CMJ and The New York Times and a seven-inch single Up With The Orcadian Tide was pressed up in summer 2007. Live shows have included playing alongside Vetiver, James Yorkston, Espers and The Earlies as well as performing at the Green Man.

“they accomplish all this with a firm perception of their own powers, drawing on such varied sources without succumbing to self conscious classicism, and stamping their own personality on their material” Wire Magazine

“A prolific and committed independent musician, SIMON FOX was formerly leader of Birmingham’s post-rock pioneers, GROVER. Between 1993-2003, Grover released a host of albums, singles and split releases on independent labels around the world. Broadcasts on BBC Radio1 (including a Peel Session in 2001), plus airtime on a variety of independent stations in Europe and the USA, helped Grover build a dedicated international fan-base and influence the UK post-rock scene.

Since then, Simon has quietened down, trading sweeping guitar theatrics for more intimate, acoustic-led songwriting. The new songs, performed under the moniker FOX, show a more personal, reflective side, with deceptively rich arrangements, a disarming wit and a flair for creating intimate moods. Recordings feature Simon playing a wide variety of instruments, including guitars, banjo, percussion, keyboards, theremin, mandolin, even occasional brass and woodwind.

Twelve feet strong with a head for dizzying heights, Health & Efficiency were raised by wolves in a forest. Leaving the pack and relocating to their practice space in historic Deritend, they experiment with sounds and music, surrounded by priceless works of contemporary art.

Their music traverses an encyclopaedia of influences; psych, folk, no wave noise and electronic perhaps being some of the more predominant. They utilise banjo, two basses, two guitars, synths, samplers and more effects and loop pedals than it’s reasonable for one band to need.

Just confirmed as additional support for this show is Lewis Garland. Intimate folk tinged sounds act as a backdrop for intricate wordplay.