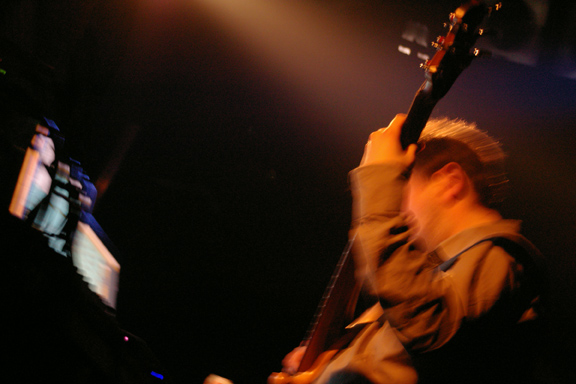 All enigma’s aside, the musical artist that is Squarepusher is actually
a guy from Chelmsford, England, named Tom Jenkinson. In the last 7 or 8
years, Jenkinson has made an enormous impact on electronic music. If
you look up Squarepusher in the dictionary you will find a definition
that says ‘someone who likes the ladies’ …. an apt description
perhaps for one of electronic musics weirdest exponents.

Squarepusher is a very prolific artist … one minute he’s managing to
squeeze Miles Davis-influenced jazz into drum-n-bass tracks, the next
he’s playing with reverb for hours, abandoning melody in favor of
trippy, dubby fusion. Squarepushers first few releases were on Spymania
and Rephlex. He was subsequently courted by R&S, Ninja Tune and
Warp before signing on the dotted line with Warp.

Squarepusher began his career with Warp with a single entitled ‘Vic
Acid’ single which was closely followed by the album ‘Hard Normal
Daddy’. Opening with ‘Cooper’s World’ the album showed that machines
could swing and that Tom could confidently take further musical risks
with his arrangements. ‘Chin Hippy’ on the other hand threw the
listener in at the deep end as an object example of technological
experimentalism. Harsh, cerebral, unique. Nevertheless ‘Hard Normal
Daddy’ wound up in end of year charts in magazines throughout the world
moving 75,000 copies in the

process. Incidentally all payments made by Warp were returned by Tom’s
accountant as they were out of date by the time he got around to paying
them in!

“Nothing is allowed time to settle and no idea outstays its welcome…
it takes at least four or five listens to absorb even the basic
structures of the record” was NME’s comment on the follow-up ‘Big
Loada’ release. By the time it was apparent that Squarepusher had very
much mastered his art so complex, wry, and exhilarating was the
mini-album. Tom describes

the musical process as “…pulling the music out of nowhere, not
thinking what you are doing.” “You have ideas, you get in the studio,
the ideas disappear and things start to flow,” he explains, “the songs
then exist in space somewhere between you and the machinery. When you
come out you have a souvenir of your time in this psychic space, a
space where

you are intuiting everything and not even worrying about things like chords and notes.”

To find out more check out more info on Squarepusher + Luke Vibert
http://www.warprecords.com/