Due to the global health concerns related to Covid-19 our team is working from home.
We are very grateful to those of you that want to support us by buying merchandise but be aware that you may not receive your items for up to 14 days.
Back to 2010 Line Up
Sun 24th October 2010
This is an archive item from Supersonic 2010 Elsewhere 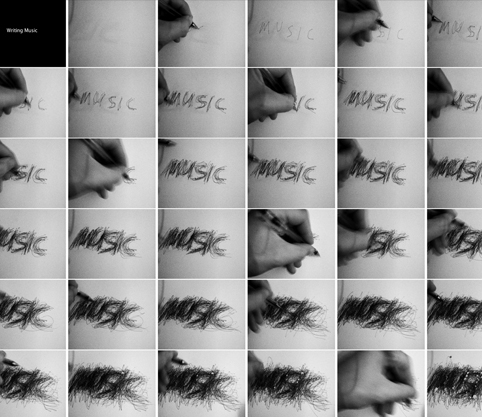 Seeing Sound is an exhibition exploring the ways in which we experience sound as light, movement, noise, and colour. Spanning 70 years the programme draws together historical and contemporary moving image works including Ben Russell’s Black & White Trypps No. 3 (2007) which documents an audience’s collective freak-out during a performance by Rhode Island noise band Lightning Bolt; and Tony Conrad’s seminal work The Flicker (1966) a 30-minute film exploring the possibilities for harmonic expression using a sensory mode other than sound; audience reactions to the film ranged from disorientation, temporary hypnosis, and intense experiences of colours and patterns, to headaches and violent bouts of nausea, all seemingly caused by the pulsating light’s interaction with the brain’s alpha waves. Other artists include Stefan and Franciszka Themerson and Benedict Drew.

Mr.Underwood will stage a rare performance of Steve Reich’s Pendulum Music. Originally scored for “For Microphones, Amplifiers Speakers and Performers” this specially adapted version will be performed using four Noise Boxes / Optical Theremins, similar to those made in the workshop, and four torches.