Due to the global health concerns related to Covid-19 our team is working from home.
We are very grateful to those of you that want to support us by buying merchandise but be aware that you may not receive your items for up to 14 days.
Back to 2012 Line Up
Sat 20th October 2012
This is an archive item from Supersonic 2012 Market Place 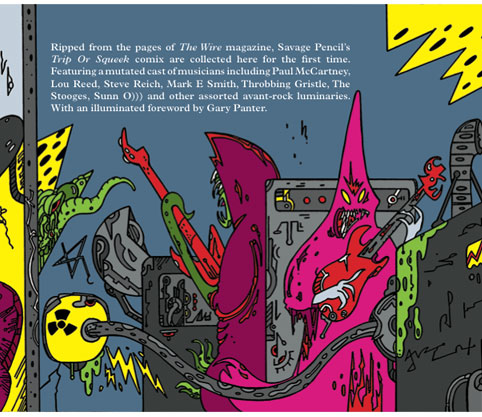 Ahead of the release of his new ‘Trip or Squeek’ publication, Edwin Pouncey aka Savage Pencil will make a guest appearance at the festival, in conversation with Frances Morgan of The Wire and Strange Attractor.

Savage Pencil’s Trip or Squeek strips have been appearing in music magazine The Wire since 2002.

Acerbic, lysergic and razor sharp observations on music, art and life, Trip or Squeek continues a tradition of satirical illustration dating back to the 18th century, albeit one that has been dosed up via the ’60s freak scene, Japanese monster movies and the weird fiction of HP Lovecraft. Musical guest stars appearing in the book include: Steve Reich, Stockhausen, Moondog, Mark E Smith, Sonic Youth, Robert Wyatt, Suicide, Kraftwerk, Crass, Lou Reed, Jandek, Throbbing Gristle, Sleep and many more. Containing over 100 comic strips, collected together for the first time, the book features extensive notes, a discography and never-before-seen preparatory sketches by Savage Pencil, and an illustrated foreword by artist Gary Panter.

ABOUT THE AUTHOR
Savage Pencil  has been writing and illustrating for music newspapers and magazines for almost four decades. His artwork has also appeared on album covers, posters and T shirts for bands including Sonic Youth, The Fall, Sunn 0))) and numerous others.