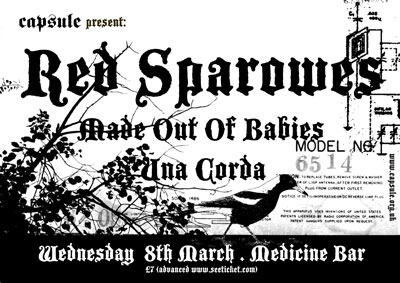 RED SPAROWES
MADE OUT OF BABIES
UN A
CORDA
http://www.seetickets.com

Red Sparowes is epic without bombast, heavy without a single
barre-chord riff and eviscerating without any clearly audible
vocals. The chiming, spindly layers of effect-laden guitars and the
swinging, entrancing drums on its Neurot Recordings debut At the
Soundless Dawn create textures reminiscent of Goblin, Tones on
Tail, Godspeed You Black Emperor and early Sonic Youth. Its attack
is syrupy and serpentine; subtle but frighteningly
deliberate.

As its playfully gruesome name
might imply, Made Out of Babies is not a demure or delicate band —
it’s an aberration of innocence.

In the tradition of artists as evocative as Jesus Lizard; as
imaginative and impassioned as Bjork; as discomfortingly frank as
Big Black and as unnerving as filmmaker Alejandro Jodorowsky, the
New York City quartet summons a wholly unique claustrophobic fury.
It’s an eye-opening revision of everything that had once seemed
acceptable and rational.