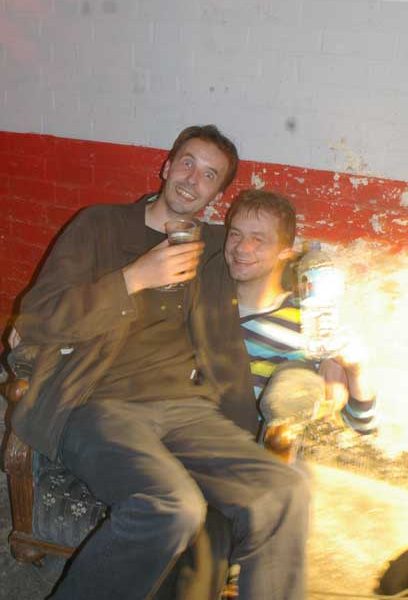 ” You know how I adjusted to
that problem of the radio in the environment? Very much the same as
primitive people adjusted to the animals that frightened them. They
drew pictures of them on their caves. And so I simply made a piece
using radios.”

Radio Iacons golden age of static explores an analogue escape
from some of the traditional constraints that performers and
audiences face alike. By performing via the airwaves, transmitting
to over one hundred second hand radios of different ages and
design, ranging from modern to retro, resulting in differing
degrees of tone, EQ, warmth and volume, creating a new listening
experience. Usually sound artists or musicians within a concert
environment are bound by the performance template of having a PA
with all the leads & wires that are necessary to support this.
The PA produces sound from a single direction/two way split, which
could be considered a limitation on the audio experience of the
audience i.e. a two-dimensional stationary sound. The Golden Age of
Static is a performance that stretches the audience’s experience as
well as the performers. Instead of the audience experience being
non-interactive and docile, facing in a single direction for the
whole event, audience members are invited to participate by
bringing there own portable radios, engaging with the sound, moving
around the venue. Hearing a wide variety of radio transmissions
will alter the whole listening experience, the sound will evolve
and mutate as you meander through the unfolding dynamic sonic
adventure.

The Golden Age of Static also reaches beyond the realms of a
sonic experience. As well as the aesthetic impact of a hundred
radios Radio Iacon are working with visual artists, animators, film
makers and image manipulators, exploring the themes of radio,
broadcast, interference and static. The sound performance will be
enhanced by an installation of projections, old TV’s, cameras and
monitors.