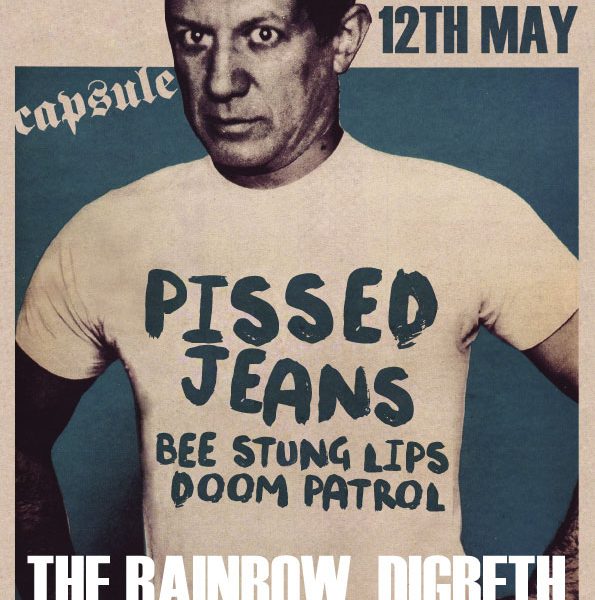 Hardcore quartet Pissed Jeans’ rock is sourced in the early-80s loose-booty sludge of Flipper and Black Flag, the tightly wound treble-spray of late-80s/early-90s noise-rock such as Drunks With Guns and the Jesus Lizard. Whereas Drunks With Guns and Flipper often dealt with chemical-induced nihilism in their lyrics, Pissed Jeans rally against bad weather and sing about overeating to deal with emotions. They’re human. They will appeal to anyone who’s ever crapped their pants and can admit it. Having a sense of shame is critical in appreciation of shit like this.

Spewed up from the murky depths of Birmingham at some point in mid 2006, Bee Stung Lips is a four-headed hideous beast, with blood-shot eyes and tentacles stretching far back into the Midlands music scene.
Chewing on notes from The Jesus Lizard, Hot Snakes and Oxbow, and then spitting them back out, with additional nods to literary giants such as Charles Bukowski and John Fante, they create a provocative mixture of wilfully abrasive noise and viscera-shredding rock ‘n’ roll. Howling, anguished, and convulsive vocals tussle with rapid-fire drums, riotous guitar and blistering bass lines, before collapsing into a chaotic heap, breathless and foaming at the mouth.
Fiercely intelligent, yet unashamedly reckless, Bee Stung Lips possess an irrepressible addictive fury along with an abundance of technical aplomb. Rapidly garnering a sizeable reputation for their infamous live performances.