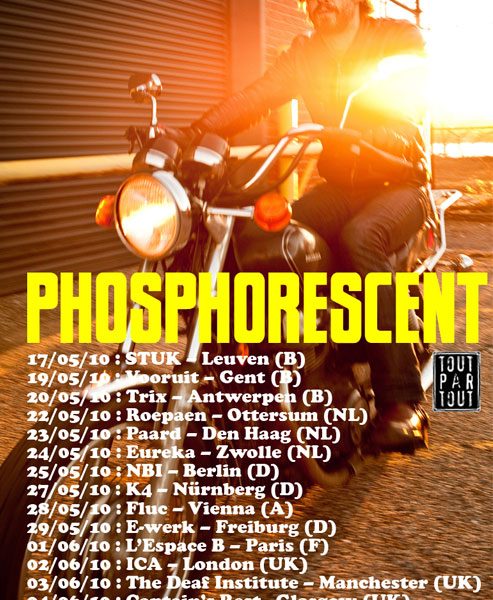 Brooklyn, NY resident Mathew Houck is the sole member of Phosphorescent. Houck’s career began in 2000 when he released the Hipolit album under the name Fillup Shack. A tour of England and Spain followed, and while the European press drew comparisons to Bob Dylan and Will Oldham, the London Evening Standard declared him “the most significant American in his field since Kurt Cobain.” Houck’s first release as Phosphorescent, entitled A Hundred Times or More, appeared in 2003 on the Warm label. The 2004 EP The Weight of Flight was his last release for the label, as the 2005 full-length Aw Come Aw Wry landed on Misra. Two years later the release of Pride began a relationship with the Dead Oceans imprint. To Willie, Phosphorescent’s tribute to Willie Nelson, followed in early 2009.

Fulfilling a dream by playing with Willie Nelson on TV at Farm Aid 2009 (alongside Neil Young and Wilco), and touring with the likes of Bon Iver, Bowerbirds, Akron/Family and Deer Tick, PHOSPHORESCENT is set to be welcomed to the top table on the strength and charisma of this immaculate, breakthrough album Here’s to Taking It Easy, Houck’s first new original material since Pride, set for release May 11 in the U.S. and May 10 in the U.K.

Where Pride was a deeply personal, haunting record that Houck recorded on his own, playing all of the instruments himself, To Willie featured musicians who’ve now become bandmates, rifling and rambling through the Nelson catalogue with an undeniable vigour. Not only did it feed their collective unity as players but gave them the oomph to solidify the makings of what Houck sees as their ‘classic’ sounding record in Here’s to Taking It Easy.

Galvanized by heavy hitters like early 70’s Rolling Stones, Bobby Charles and Dylan’s Street Legal (1978), Houck found his songwriting path through to some killer tunes that are given enough space for them to really fly. If Pride was built for 5am introspection and To Willie soundtracked the last chime at the bar, Here’s to Taking It Easy seems as though it’s made for any time, any season.

“They have been described as a punk band playing folk songs, and they do indeed have the ramshackle quality of a lo-fi garage unit thrashing and bashing their way through their set. But sometimes they sound as ragged and electric, as fast and loose, as an alt-country quartet”

One of the most exciting emerging pianist composers in the UK with performances of his hypnotic and beguiling piano music.