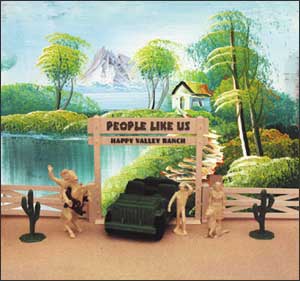 “people like us is the work of vicki bennett, whose cd’s and lps
on Soleilmoon Recordings, Staalplaat and Audioview labels feature
her unique plunderphonic styling. Dadaist samplings and reshuffling
of cultural oddities from discarded LPs is a recurrent theme, as is
the use of intercepted radio broadcasts gutted and completely
recontextualised, There is an air of both humour and impending doom
within the work of PLU. From her first release in 1991, to her
latest project, the forthcoming “The THermos Explorer” on Hot Air
label, people like us has created or contributed to more than 25
cds and records as well as several collaborative releases and
numerous compliation tracks.”

To find out more check:
www.peoplelikeus.org

“Andrea parkers “Kiss My Arp” album (Mo Wax,1999) was a stellar
marriage of orchestral, electro gurgling and cerebral minimalism.
She took a few piano and cello lessons in school and a Cubase
course in college, but studying music in a formal setting has not
been her preferred approach. “Primarily,” she admits, “it’s about
my ears.” Having an army of classic analog synths and a
self-curated library of sound effects at her command can only help.
She performed recently at the Women Take Centre Stage Festival in
London in early March, and is currently at work on the first
release for her new label, Touchin’ Bass.”

A night cuarted by Capsule for the Fierce Festival To find out more
check:
www.fierce.info/