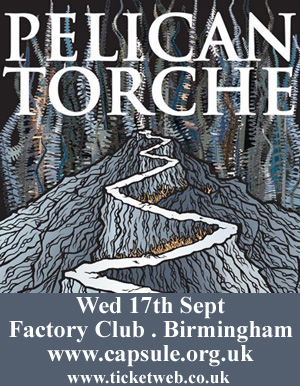 “Thunder Pop.” Sure, this sound was hinted at by TORCHE singer/guitarist/songwriter Steve Brooks’ former group Floor, founded by the mighty Black Sabbath and nearly accomplished by mainstreamers Queens of the Stone Age… but such truly anthemic, triumphant and absolutely massive heavy rock has never been so downright catchy! The mind-rupturing debut album by the Miami, FL quartet—which also features former Floor guitarist Juan Montoya (who, along with Brooks, also played in the mighty Cavity), drummer Rick Smith (ex-Tyranny Of Shaw) and bassist Jon Nuñez—echoes the scooped-EQ tones (all lows and highs with precious little mid-range) of the Melvins classic Ozma, the infectious riff-rock of Nirvana’s Bleach and glissando multi-part harmonies of classic Beach Boys.

TORCHE’s gloriously sung, harmonized and soaring vocal arrangements accompanying the most monolithic riffs of modern times, is truly a massive sound made all the more devastating by the album’s masterful production. The lumbering sludge of opener “Charge of the Brown Recluse” heralds the coming rockpocalypse of raging tracks like the behemoth chamber pop of “Mentor” and the head-bobbing sliding harmonic guitar lines of “Rock It.” Chiming hook-laden tunes like “Fire” and “Erase” are streamlined thunder pop chunks that get right to the point and self-immolate in just over two minutes.

After Floor, er, collapsed in June 2004, Brooks and Montoya immediately started thinking up plans for a new band that would continue where their former group left off. Robotic Empire label founder (and huge Floor fan) Andy Low suggested that the new band work with his friend, Smith on drums. The lineup soon solidified with Nuñez, one of Smith’s long-time friends. TORCHE had ignited.

Unhindered by the impositions of the vocal yoke, Chicago instro-sorcerers Pelican transcend the limits of time and space to expound upon the stunning finesse and painstaking subtlety with which they command their already indelible sonic signature. Restoring instrumental composition to its former glory is no insignificant task, and to do so with such remarkable authority and presence is a testament to the sheer will and unmitigated talent of Pelican’s membership. Levying cinematic melody upon glacial heaviness, they achieve the sort of inevitability usually reserved for weather systems and natural disasters.
http://www.hydrahead.com/pelican/