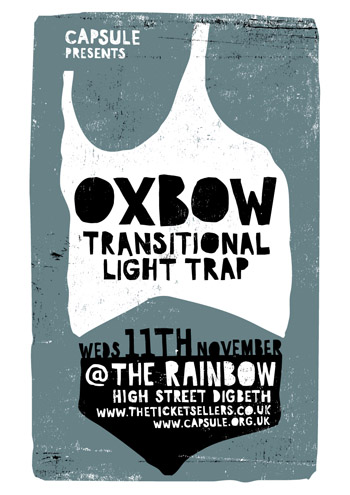 Intensive, confrontational, raw and uncompromising: four words I think of when someone mentions Eugene and the boys to me. Amazing jazz infused, Birthday Party style noise, they produce a live show where you never know what might happen, an element which is as exciting as it is scary. Eugene is unpredictable and unsettling as he prowls the stage looking for unsuspecting victims to terrify and pours his soul into the microphone creating something that is undeniably powerful.
www.myspace.com/theoxbow

Transitional
The line up consists again of musican/producer Kevin Laska on guitar/voice/electronics/synth and drum programming, who’s probably best known
work before transitional was with Anthony Di Franco ( ex- skullflower ) as Novatron. Dave Cochrane( who’s past and present credits to name a few
include Head of David, jesu, Greymachine and God) on Basses.
www.myspace.com/transitionaluk