Due to the global health concerns related to Covid-19 our team is working from home.
We are very grateful to those of you that want to support us by buying merchandise but be aware that you may not receive your items for up to 14 days.
Back to 2007 Line Up
Sat 14th July 2007
This is an archive item from Supersonic 2007 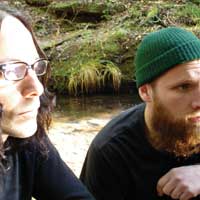 OM
Formed by Al Cisneros (bass/vocals) and Chris Hakius (drums), both founding members of legendary doom pioneers Sleep. OM released their album – Conference of the Birds in 2005. Comprised of two songs that build on their use of cyclical rhythm, riff and vocal intonation, the duo’s new album blends metal, chant, drone, dub and psychedelia. The band’s lyrics expound upon the structure of the universe, potentiality and freedom from the physical body.
www.myspace.com/variationsontheme