As our team are currently working from home, they will be posting out merch less frequently. Please allow up to 14 days for your order to arrive. Thank you for your patience.
Back to 2010 Line Up
Sat 23rd October 2010
This is an archive item from Supersonic 2010 Theatre Space 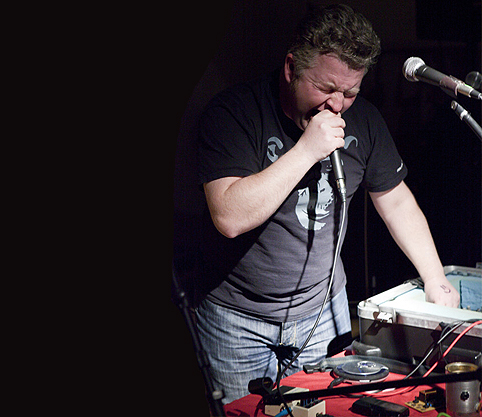 The ‘Breach’ project is a series of live performances for voice and prepared sound.

One of the founding members of Napalm Death, and Scorn Nicholas Bullen was responsible for the invention of the Grindcores throat-shredding growls, Developed as a demonstrative companion to a text piece focused on strategies for ‘silencing’ language, the live performances utilise the human voice as a medium for exploring ways in which the voice itself can be used to undermine the codes which govern discourse.Multiple microphones, live sampling and electronic processing are used to capture, layer and transform the voice: breath, whispers, glottal tics, snarls, growls, wails and cries become a shifting soundfield of immersive drones, radiator vibrations, rhythmic pulses and shards of noise denuded of linguistic content.