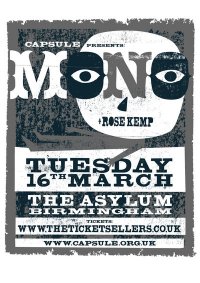 The music is naturally majestic, with MONO’s trademark wall of noise crashing beautifully against the largest chamber orchestra the band has ever enlisted. The instrumentation is vast, incorporating strings, flutes, organ, piano, glockenspiel and tympani into their standard face-melting set-up.

Recorded to analog tape with long-time friend and producer Steve Albini, there is an intimacy captured here that is at once beautiful and a little terrifying. The creaking of old wooden chairs as the orchestra rocks in their seats (both literally and figuratively), puckered lips rolling along flutes, and even the conductor’s opening cue can be heard during the hauntingly quiet opening moments

While Hymn continues to mine the cinematic drama inherent in all of MONO’s music, the dynamic shifts now come more from dark-to-light instead of quiet-to-loud. The maturity to balance these elements so masterfully has become MONO’s strongest virtue.

Rose’s unique powerful vocal is sometimes operatic, sometimes fierce but equally haunting, her musical style is extremely difficult to categorize. Folk-esque /heavy rock has previously been cited but doesn’t really sum up this exceptional album. Woven together with multi hook harmonies and quality instrumentation, this album slowly buries itself under your skin. Lyrically the songs are compelling and their content somewhat mysterious but backed up with heavy rock guitar, oversized drums and old Synths and organs, they are infectious and thought provoking. Her influences are numerous but include the classic rock of Black Sabbath and stoner rock legends Melvins, Drone artists such as Earth and Om. She is also influenced by classic Black Metal, Doom and 70’s prog right through to timeless songwriters including Kate Bush and Tom Waits, amongst many others.

Part of folk-rock heritage, Rose is the daughter of Maddy Prior and Rick Kemp from seminal, Pioneering British Folk-Rock band Steeleye Span.  As a young teenager she sang and toured and occasionally wrote with her parents various different projects including Steeleye Span (who still gig today), and her life on the road began when she was knee-high, accompanying her parents on tour.