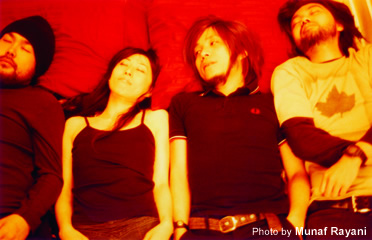 Tokyo, Japan’s Mono are a peculiar group. While most bands offer
up their sincerest and most genuine recordings in their infancy and
spend the rest of their careers trying desperately to rediscover
their youthful energy, Mono’s trajectory has been quite the
opposite.

Their early recordings are a visceral homage to their past and
present heroes — the documents of a band boasting an impressive
symphony of sound in spite of their relatively small line-up. These
days, they have become one of the most passionately aggressive rock
bands of the last decade, executing their soaring crescendos,
titanic sheets of distortion and dark melodies with the delicacy
and precision of a folded paper crane.

D.Louis Baker has been in bands such as Solway Fifth & deadsunrising. Now
teamed up with members of The Starries, Mills & Boon & deadsunrising he has
turned to a more pop sound with mostly piano lead, full band songs. Expect
sing-alongs, dance-alongs and smiles all around. Sample some material at
www.dlouisbaker.com