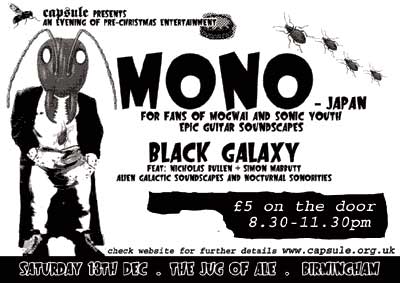 Event Details:
Mono. What these four, angular Japanese twenty-somethings in thrift-store garb unleashed on the perfectly unkempt gathering of hipsters at Tonic that night was a pure, unadulterated exercise in ritual guitar execution. Bloodless, yes, but no less scarring. Knees buckled, teeth rattled and eyes rolled back in perfectly coiffed heads as a musical apocalypse-a magma throw-rug-was draped over the audience. Even as members of the crowd tried to jam clinched fists into their ears to muffle the cattle call of Armageddon, they couldn’t bring themselves to leave the tiny hall. If this was death-or deafness at the least-then they were satisfied having the soaring, battering, bone-jarring guitars of mono supply that final ringing in their ravaged ears.

When a band from Japan detonates the place like Mono did that night, certain parallels are unavoidable. So here goes: Mono are not the bomb, they are a bomb.

Formed in 2000, Mono is Takaakira Goto (guitar), Tamaki (bass), Yasunori Takada (drums) and Yoda (guitar). Their first full-length record, Under the Papal Tree, was touched by the hand of John Zorn, who put the disc out on his Tzadik label.Papal Tree found a home amongst the post-rock minions of Japan, but received little fanfare in the fare-skinned corners of the world-thanks in large part to the heavy swaths of Sonic Youth and Mogwai-style pyrotechnics that dominate the album.

But on their ominous sophomore disc, One Step More and You Die, mono has conjured up their own version of pummeling guitar rock: and it is pitch black. Layering eerie, vapor trails of ambient white noise, with napalm waves of primordial guitar, mono creates a nightmare dreamscape where sound takes on physical form, makes a fist and buries it into your gut.

Need proof? Check out album centerpiece “Com(?)”. An epic 15:57 long, listening to it is like standing in a roaring wind tunnel, guitars whipping up a maelstrom, drums throwing sucker punches in your face, bass exploding in your brain pan. You could swear the flesh is being peeled from your bones in excruciating strips. A Matisse dipped in pig’s blood and painted over with the ink-blotted tails of cobras, Mono is beautiful; Mono is violent.

“When the audience gets smaller, we get more violent, ” says Takaakira…”we try to kill them by sounds.”