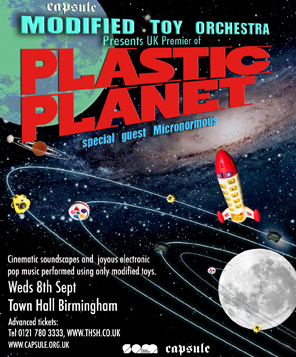 After international performances to critical and audience acclaim, MTO return to their hometown for this UK premiere of their new album Plastic Planet, performed using only modified toys. With its subtle ecological concerns, cinematic soundscapes and joyous electronic pop music, this will be a truly a unique and uplifting experience.

Modified Toy Orchestra rescue electronic toys from car boot sales and convert them into new, strange and wonderfully sophisticated musical instruments. Taking them apart, they find new connections within each toy and explore the latent potential and surplus value inherent in these liberated circuits.

Guided by this hidden world, they seek to make a form of music devoid of personal narrative or autobiography, instead asking bigger questions about our relationship with the next new gadget or our desire for the constant upgrade.

Five years in the making, Plastic Planet continues MTO’s philosophy of performing live electronic music without the use of laptops, sythesisers or samplers. No conventional instruments of any kind are used at all – a philosophy which began with their debut album, Toygopop.

On Plastic Planet they develop further concerns: themes of utopian bliss on Funfair for the Common Man; the rise of the information age on Qwerty, the collapse of empire on Great Kings Fall and the consequences of ecological vandalism on Earth One.