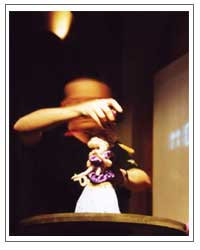 metapod.expo
The showcase for innovation, new practice, opportunity and discussion for the creative industries
www.metapod.org.uk

9pm – 10pm.
Modified Toy Orchestra, Brian Duffy
Electronic sound toys have been rewired and reconfigured to create a series of musical instruments each creating their own new electronic sounds which oscillate between the familiar function of the toys and new sounds far removed from the original function. As the performer plays and conducts the amplified toy orchestra, the resulting sounds create a stunning effect. The performances of the toy orchestra are unique each time they are played according to the sequencing and the physical state of the performer giving importance back to the live performance and digital sound. During this event Duffy will create his visually and sonically projected Texas Haiku Hidden Poem made using random word generation from Speak & Spell machines.

10.00pm – 1.00am
Iacon dj collective combine their unique blend of visuals with an ecclectic mix of samples played through a distortion pedal. They have played at several capsule events under the name of wonderland, and has included the chicks on speed night as well as being the first sonic visual commission at capsule. Soon to have their first release on Winnebago records.

Dreams of Tall Buildings
were formed at the end of 1999. their sonic venture began by recording sound textures from media, sounds from their environment and surroundings. they have been known to use type writers and super 8 projectors in order to create unearthly rhythms rather than using traditional percussion. they avoid becoming slaves to genre by having a doctrine which is as evolving as their sound constructions themselves. their sound ranges from minimal microwaves, breathing and non notes to hideously distorted trumpets and string loops sounding like miles davis stabbing stan getz in a floatation tank .