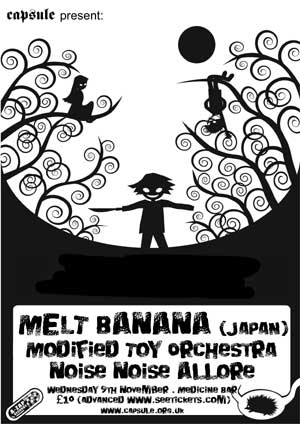 Out of the old ashes sizzle and scream a new wave and
realization simply called MELT-BANANA. A maelstrom of experimental
heart surgery, Melt Banana walk on water, They effortlessly juggle
all of those sharks that think they’re swimming in new, unexplored
territories. Here are the imported children of the no waves gone
by, a hardcore-informed, audio info overload from Tokyo’s ferocious
underground. MELT-BANANA sweat out a super-adrenalized,
maxi-caffeinated collision of frenzied drum rhythms and torturous
guitar squeals through tiny, frantic, hyperrhythmic little songs.
Frontwoman Yasuko O.’s ultra-high-pitched screeches and Agata’s
screaming slide guitar vie for supremacy across a rhythmic frenzy
that is so ridiculous and precise, it will crush you with it’s
brilliance. Here are the cerebral gnashing guitars, the aggravated
pep squad proclamations and the neck-snapping rhythm change-ups
irresistible to those seeking a new musical truth. MELT-BANANA
doesn’t sound like anything you’ve heard. Simply put, they are
unclassifiable. If that’s not enough for you…. well then, back
into your cave Grogar

Brian Duffy + The Modified Toy Orchestra
The UK’s foremost circuit bender. Ever wanted to see a ‘speak and
spell’ sing like the devil or wished to see a  hula girl
toy  take a darker more satanic route? Now is your chance as
Brians’ army of robot toys march onward to create twisted pop of
the most disturbing order.

Noise Noise Allore
Take their cues from such post punk luminaries as devo and gang of
four but add an urgency that is all their own, a world where
rhythmic time changes vie for attention with angular shards of
guitar and a vocalist that can barley contain the voice from within
his own body, a highly charged sexual rush of a show that will
leave you confused and wanting more..as all good lovers do. Expect
fruity fun.