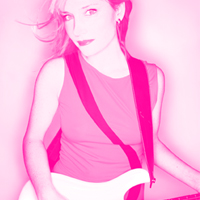 Marnie Stern (US)
An American musician, songwriter, and guitarist. She resides in New York City and has garnered much acclaim for her technical skill and finger-tapping style of guitar play, described as a Guitar Hero showdown between Don Caballero, Hella and … Van Halen
www.myspace.com/marniestern1