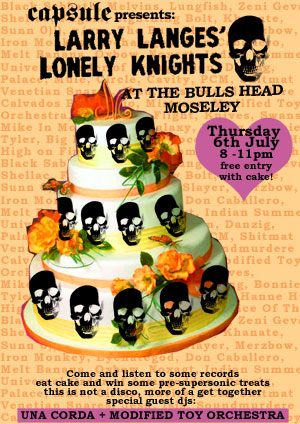 + Supersonic related prizes to give away


Hey kids!!!
We’ve decided to start a new night at the Bulls Head in Moseley,
Birmingham.
It will take place on the first Thursday of every month, kicking
off on the 6th of July  from 8pm – 11pm.
Come and listen to some records, eat cake with the grannies and
have a bit of a gossip, this is not a disco, more of a get
together.
Each month we’ll be inviting special guests to delve into their
record collections and share some aural delights, this months
special guest dj slot comes from Una Corda + Modified Toy Orchestra
– with a pre Supersonic theme and related give aways .