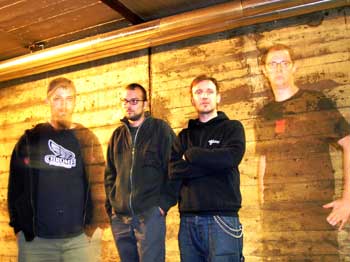 Complexly beautiful soundscape from Switzerland’s Knut, ambient
heavy metal. Formerly labeled as a “groove-oriented tech band,”
Knut change gears slightly with Terrafomer, propagating a more
Neurosis-influenced tribal beat – sludgy riffs, slow tempos and
atmospheric sounds – yet weaving back in their own math-y style.
Repetition and trance-y beats frame the anguished, guttural vocals,
with words that sound like they might be in English, or might not –
it’s hard to say!  Their perfection of hypnotic, heavy
radiance puts them easily in league with the most sacred heroes of
the genre.


Sika Redem
The West Midlands has always had a knack of being on the cutting
edge of metal whether its with the forefathers of the genre, Black
Sabbath, the early thrash of Napalm Death or it’s newest hopes Sika
Redem, who somehow manage to have more creativity in one ten minute
track than most bands cover in a complete LP. Complex intricate
rhythms combine with crushingly heavy riffs all containing a
melodic edge that metal so often forgets about.