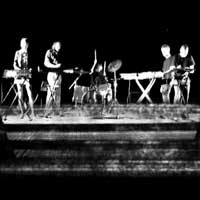 Kling Klang –
Kling Klang are a five piece kraut-punk band from Liverpool, consisting of four synth players and a drummer. Formed in mid 1999, as a 3 piece using only cheap synths and old drum machines. Since then they have used every show and release as a way to explore new dynamic ways of presenting their unique sound.
http://www.myspace.com/superposition