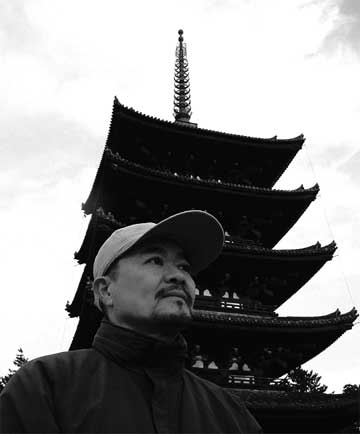 This show brings together in collaboration two fiercely
independent and forceful musical forces for the very first time.
Shape shifting artists exploring the outer terrain for over a
quarter of a century and rarely playing live in the UK, this tour
pitches the two together in near comic fantasy. for they are
the..Original Gangsters Of Noise.. Of course now the .noise.
aesthetic or label hardly describes their outer-music exploration
at all but it is through their ability to hear music in the modern
din, the sound of space(s) and the constant rhythm of life that
their music orientates itself.

Starting his career in the early 80’s by performing guitar
improvisations in the clubs and streets of Tokyo, he gained wider
notoriety as the leader, guitarist and singer of STEVE ALBINI
produced  progressive hardcore trio ZENI GEVA. Yet it’s his
solo work that has earned him a devout following in avant circles.
He has already developed an extensive arsenal of musical talent:
composer, improviser, singer, electronic wiz, drummer, and even
Butoh dancer. Recently his penchant is for indefinable atmospheric
electronics with a wild improv bent. He has worked with dozens of
bands and artists, which reads like a role call of the most
exciting musicians on the planet: JOHN ZORN, JIM O’ROURKE, RUINS,
MELT BANANA, BOREDOMS, OTOMO YOSHIDE, and EARTH.

As dark, experimental punk was meshing  with art school in
70’s Europe, Z’EV brought non-traditional percussive voicings to
the NYC avant-garde scene (influencing Brian Eno among
others). Since then he’s explored ‘spatial poetics’ in
athletic yet graceful live performances that utilise colossal
metallic sheets, giant coil springs, interconnected pipes and other
found materials culled from the junkyards of the globe. His dozens
of collaborative projects include work with JOHN CAGE, GLENN
BRANCA, HAFLER TRIO, PSYCHIC TV, and RHYTHM &  NOISE. He
has released on TOUCH, STAALPLATT, SOLEILMOON and TZADIK amongst
many.