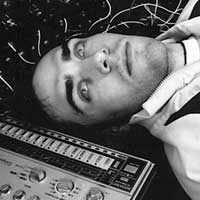 Kid 606
KID606 aka Miguel Depedro, born 1979 in Venezuela and raised in California. Critically acclaimed releases (both legal and illegal) on Ipecac, Mille Plateaux, Fatcat, and  his own tigerbeat6 label as well as remixes for artists as disparate as Depeche Mode, The Locust, Peaches, and Super Furry Animals. Kid606 is an inspired, angry and iconoclastic artist more concerned with emotional content then popularity and unwilling to be pigeonholed in any vacant scene or soulless musical genre. It should be noted, however, that he is primarily inspired not by his electronic contemporaries, but by his love of the Industrial music, Death metal, and Industrial metal of the 1980s and 90s, particularly bands like Godflesh and Napalm Death.
http://www.myspace.com/kid606