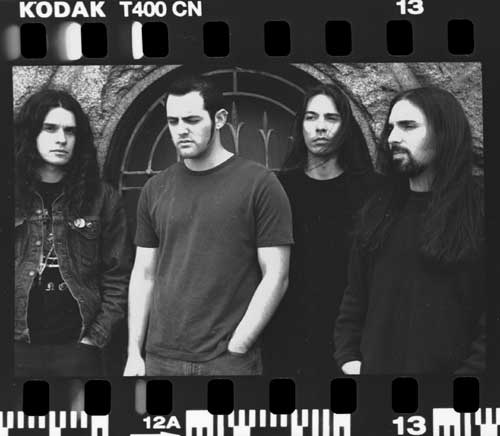 Like a cement mixer slowly filling the room as you read this web page, KHANATE belches
another discharge of lung stopping power. Not happy music, but TOTAL music. Even more
sparse than their first record on Southern Lord,
this boils doom down to the individual atoms. Slow and deliberate, it
paints the room the room in coal dust choking all in its path.
Necessary and essential for those picking up the pieces from similarly
minded projects from sludge captains like the MELVINS, EARTH and BORIS.
Buy this and live forever with the knowledge of the gods!

Its been said about KHANATE before that “slow is the new loud” (Julian
Cope actually). This being true, Khanate’s sound is a deafening roar. A
small nuclear bomb in the swimming pool as you sip an ice tea. Take the
brutal slow dynamics of EYEHATEGOD or EARTH and add a chilly macabre
menace and then you have a good start on where this record will leave
you. Members in the band are in bands such as BURNING WITCH, SUNN
O)))), ATOMSMASHER, SCORN, OLD and BLIND IDIOT GOD.

Formed in Birmingham during 1999, MISTRESS have released two albums to date  “Mistress” and “The Chronovisor”  to rave reviews and have gigged with the likes of NAPALM DEATH, MAYHEM, ELECTRIC WIZARD, BOLT THROWER and EXTREME NOISE TERROR. Their hard-to-pin-down sound comes across as a sickening sludge/grind/doom hybrid, reminsicent of the early U.K. grind scene of the late ’80s and early ’90s, and has been described as “a vile musical bastard, a bilious, screaming, snot-faced sludge orphan with all the taste and decorum of a sexual encounter in Wormwood Scrubbs.” Haddonsfield Illinois – Goblin influenced 70’s horror film music, slowed right down, giving it a very doomy feel (all done on synths and a bass guitar) – complete with dialogue samples from such films. Esquilax side project
Add Content