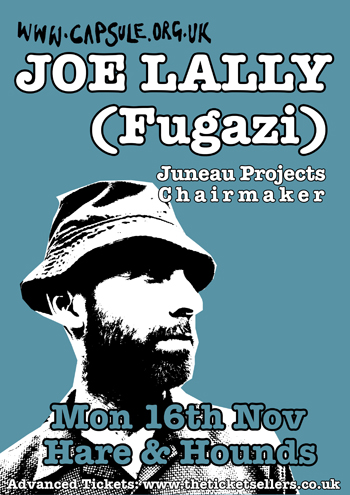 Joe Lally has played bass in Fugazi since their inception in 1987. In 2003 the members of Fugazi decided to take an indefinite hiatus from recording and performing. Since that time Joe has continued to write and perform solo material in collaboration with various musicians and friends.
www.myspace.com/josephlally

Juneau Projects was formed in 2001 as a collaborative practice by Ben Sadler and Philip Duckworth. Based in Birmingham, they have exhibited nationwide and internationally. Their work engages with people and folk histories, bringing together music and found imagery in new interactive combinations. In early performance works they used mobile phones, wood chippers, microphones and cd walkmans, often destroying them to make unexpected sounds. Their work has developed to encompass video, installation, sculpture, performance and painting featuring an array of natural imagery, such as animals and birds, which seek to express how we think we feel about nature in the 21st century.
www.juneaurecords.co.uk/

Chairmakerharnesses the sounds of traditional folk and mixes it up with 21st century electronics. The results are lush soundscapes, pastoral collages and the essence of firelight. Think of Paul Giovanni, old wives tales, ritual magic and english folklore blended together with a hint of 80’s synth pop and a dusting of caustic rhythm.’