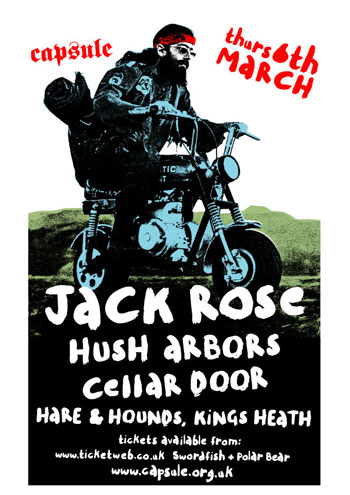 Jack Rose is one of the most revered guitarists of his generation, raw, emotive as well as proficient and gifted, his appeal criss-crosses between old time blues/folk fans, greasy rock n rollers, drone metal heads and those enthralled by the current wave of Americana.
http://www.myspace.com/jackrosekensington

Hush Arbors is a singer and guitar hand from the USA that has that timeless mysticism that brings to mind Syd Barrett’s amazing non-linear songcraft , Japanese widescreen acid-folk and Vincent Gallo’s hushed murmurings. His measured voice and quixotic guitar style will untether the audience expectations and leave them vulnerable to beautiful.
http://www.myspace.com/husharborsmusic

Kicking out a volatile mix of fluid, danceable post-rock and reverb-drenched, hammering riffs, Cellardoor opt to cut the guitars belly up and let them bleed. The Birmingham based three-piece draw on influences as disparate as Battles and Russian Circles whilst honing a distinctive, uncompromising sound all of their own.
http://www.myspace.com/cellardoorsound