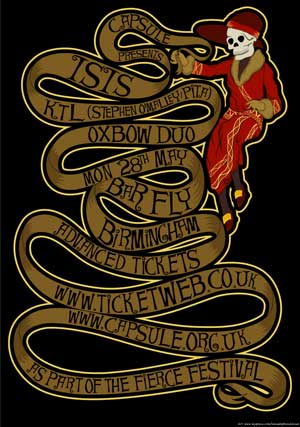 Isis create their own universe and rules, they are compromisingly heavy, slow and brutal, but apply a deftness of touch that so many other bands using the quiet/loud dynamic miss completely. They are hard to categories, but all the more interesting for it, using vocals sparingly they approach the idea of a voice as another instrument in their cannon, they want to bludgeon you but they also want you to see the inherent beauty in all that is ugly and while you imagine that a band playing ten minute slow burning epics would be boring to watch they are hypnotising and entrancing and above all exciting.
http://www.sgnl05.com/

KTL
Stephen O’Malley (Sunn 0)))/Khanate) and Peter Rehberg (PITA) are two of the most celebrated artists in the world of extreme music. A collaboration taking in parallel worlds of Extreme Computer Music and Black Metal. A collision of the light and the dark. The collab came about as the two were working on a theatre production by Gisele Vienne and Dennis Cooper, entitled Kindertotenlieder.
http://www.ideologic.org/
http://www.peterrehberg.com

Oxbow Duo –  Eugene Robinson and Niko Wenner, the singer/lyricist and songwriter/architect of Oxbow’s mean mania, make the making of Oxbow music a thing of rarefied beauty using little more than the rudiments of guitar and voice for the non-electrical rendering of a terror no less absolute because of a lack of volume.

Exorcising demons, gang fights and classical guitars. From Milan to London to Berlin, The Robinson-Wenner Acoustic Duo, sits astride the low-fi fence like an ogre of less than obvious intent with its renditions of Oxbow’s musical back catalog, as well as music created specially for these rare events. A must see, hear, now.
http://www.theoxbow.com/